The audience chamber is an area in Strife that is accessed from the castle during the Front's attack against the Order. It is located directly across from the hospital, just west of the entrance to the Programmer's keep. It uses the music track "Slide".

This is one of the few Strife maps that can only be accessed for a limited time; after the Programmer is killed, this map becomes blocked off in New Front Base due to the Front's new headquarters being built ontop of the temple's original entrance. Due to this, the player should seek out the three secret areas here before leaving this map. 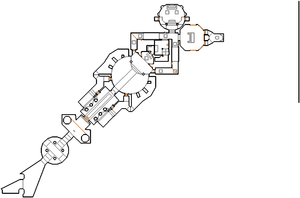 Letters in italics refer to marked spots on the map. Sector numbers in boldface are secrets.