Revision as of 03:10, 27 November 2021 by XymphBot (talk | contribs) (Automated edit - rm Speedrunning section)
(diff) ← Older revision | Latest revision (diff) | Newer revision → (diff)
A checked version of this page, approved on 27 November 2021, was based on this revision.
This level occupies the map slot MAP08. For other maps which occupy this slot, see Category:MAP08.

MAP08: Audience Chamber is an area in Strife that is accessed from the castle during the Front's attack against the Order. It is located directly across from the hospital, just west of the entrance to the Programmer's keep. It uses the music track "Slide".

This is one of the few Strife maps that can only be accessed for a limited time; after the Programmer is killed, this map becomes blocked off in New Front Base due to the Front's new headquarters being built on top of the temple's original entrance. Due to this, the player should seek out the three secret areas here before leaving this map. 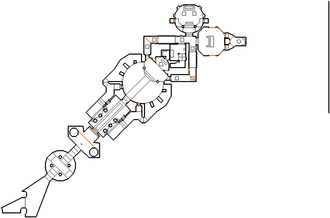 Map of Audience Chamber
Letters in italics refer to marked spots on the map. Sector, thing, and linedef numbers in boldface are secrets.

To the east of the valid map area, there is a separate linedef (656) that is 2,048 map units long. It references sidedef 867 that, in turn, references sector 67, but the arrangement serves no evident purpose.

The player 1 start (Thing 0) and teleport map spot 2 (Thing 18) have no flags set for any of the three difficulty classes, but because of special handling in the engine, they function normally in the level.