Revision as of 06:04, 3 December 2022 by XymphBot (talk | contribs) (Automated edit - Remove level stub)
(diff) ← Older revision | Latest revision (diff) | Newer revision → (diff)
A checked version of this page, approved on 3 December 2022, was based on this revision.
This level occupies the map slot MAP08. For other maps which occupy this slot, see Category:MAP08.

MAP08: Final Outpost is the eighth map of Doom 64, and final level set in the UAC bases. It is designed by Randy Estrella. The level is filled with enemies and the music track is "The Damned". The level has some tricky puzzles and quite a few dangerous traps. The end of the level is a fight with barons of Hell and Hell knights; once they are all killed, a stairway rises and you can exit the level through a teleporter. 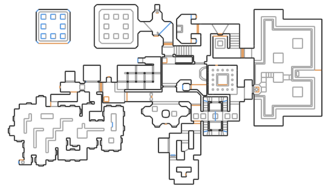 Map of Final Outpost
Letters in italics refer to marked spots on the map. Sector and Thing numbers in boldface are secrets which count toward the end-of-level tally.

Player begins in a walled up room facing a switch which lowers the wall and immediately puts the player up against a company of zombiemen. Kill them and look on the floor for a light that doesn't match the rest. That triggers a platform that lowers to take you to the surface. Once you go up, you cannot re-enter this first room.

Player makes his way through the hall towards a chaingun where suddenly the floor will drop from underneath him and get ambushed by more zombiemen. After killing them, staircases will activate allowing the player to return to the hall and collect the chaingun and continue on. Open the door on the right to enter the next section of the hall. Shoot the imps through the window on the right, then activate the switch to open the wall to the left. Kill the nightmare imps and activate the next switch. This will cause the column with the first switch to recede into the floor. Go around to the right and through the oscillating corridor killing the nightmare imps along the way. When the player gets to the end, there will be a super shotgun to pick up. Then the player makes his way out of the corridor killing the next wave of nightmare imps in his way. Go into the teleporter and kill the lost souls lying in wait, then jump into the alcove to collect the blue keycard. Jump down into the water and run across the valley into a niche that will make the teleporter drop down momentarily for the player to return to the hall, then proceed through the blue door.

Upon immediately entering the blue door, the player will see the red keycard perched on top of a computer block. Keep going to the left until a switch on a center block wall is found and activate it. This will cause the wall to recede into the floor, followed by imps and sergeants appearing and attacking. Take them out, then scale the wall along the left until you find another switch in the corner. This switch causes even more of the walls to disappear, making the room more open and also summoning a hoard of sergeants and a baron. Destroy them all, then a section of wall will drop which gives you access to the other side of the computer block holding the red keycard. There will be a switch to your left which will drop the computer block and open a couple of alcoves revealing some rocket ammunition, health, and a Hell knight. Collect the red keycard and whatever else you can and kill the Hell knight, then exit the room.

Back in the hall, a switch just to the left of the blue door is now accessible. This causes a platform outside to drop down momentarily. Activate the switch, go through the teleporter, and get on the platform before it raises. Then jump into the second main hallway and kill the Hell knights lying in wait. Then enter the room with the yellow keycard sitting on top of a stone block after killing the lost souls inside. In this room are two switches on either side of block. One drops the block down, but a cage along with it to prevent the player from collecting the key while the other switch raises them back up. The player has to go outside the room and stare at the lighted yellow square in the wall which has the same design as the top of the yellow keycard block. Activate the square like a switch and the platform will drop down without the cage and only then will the player be able to collect the yellow keycard.

Before entering the yellow door, across is a niche with a soul sphere. By collecting it, the player will have to face a baron. Through the yellow door is a walkway that encircles a large red radiation pit. This walkway is infested with nightmare imps that the player will need to dispose of. When the player gets half way around the walkway, barons will appear on the blue square platforms lining the radiation pit, along with a Hell knight on the walkway. The player may have to use some of his more powerful weapons to destroy them easier. After killing all of the barons and Hell knight, a bridge and stairs will rise from the radiation pit, creating a path for the player to reach the teleporter and end the map.

Once you emerge from the starting room, there will be a window overlooking the red radiation pit and final portion of the map. You can pick off some of the nightmare imps that are throwing their fireballs at you.

In the large room beyond the blue door after activating the second switch which drops many of the walls clearing a large space, when the sergeants appear, they will do so in linear formations. If you aim your super shotgun just right, you can take out the entire lines in just one or two shots before facing the baron that accompanies them.

As stated in the walkthrough, it is not necessary to explore the rooms beyond the red door to finish the map, unless you are looking to achieve 100% completion.

In the final section when the barons appear along with the Hell knight, get the knight to attack one of the barons and let them fight until the knight is defeated. This will help you slightly save on ammunition for taking all the barons out.

Whatever you do, don't fall into the radiation pit. To do so means sure death, and you'll have to start the map all over again. There is no elevator to take out of there.