MAP08: Weird Science is the central map of Ghoul School 3D's second episode. Here Prof. Mengeler conducts experiments via a gross misuse of school funds; it is also the origin of the eyeguy epidemic. It was designed by Mike MacDee (Impie) and uses the music track "".

Every few minutes or so, eyeguys appear in strategic places all throughout the map. If Spike lingers too long, the place will become infested with eyeguys. 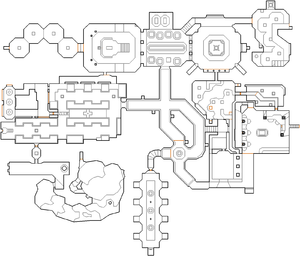 Map of Weird Science
Letters in italics refer to marked spots on the map. Sector, thing, and linedef numbers in boldface are secrets which count toward the end-of-level tally.

Inner Sanctum Prof. Mengeler is here, guarded by another robot. He tells you where to find the Principal (if you haven't already) and gives you access to several items if you keep him from getting killed: a second Rivet gun, the Moon Cheese generator, and the Gamma ray, your most powerful weapon. Mengeler tasks you with going to the land of the dead and retrieving his lost lab key (blue key).

Prison Principal Holtzmiller is here, ranting about the misuse of school funds. Talk to him to get his office key (yellow key) and return to MAP06: The Halls Have Eyes.

* The vertex count without the effect of node building is 2065.