MAP09: Just Visiting. No, Really. is the fourth map of Ghoul School 3D's second episode. It is essentially the land of the dead, where especially hostile dead folks go after passing on. It was designed by Mike MacDee (Impie) and uses the music track "".

Every few minutes or so, fireguys will spawn in the central area around the portal, making it essential that you stock up on water before entering the Deadlands. 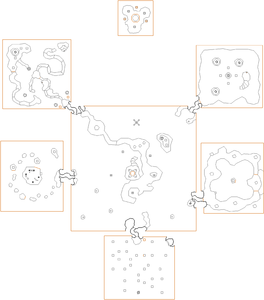 Map of Just Visiting. No, Really.
Letters in italics refer to marked spots on the map. Sector, thing, and linedef numbers in boldface are secrets which count toward the end-of-level tally.

Spike's objectives are to re-open the portal back to earth, collect three skull orbs from the Ghoul Brothers, and retrieve the blue key (visible on a pillar near the portal).

Once you enter this world, you cannot leave for some time, so stock up on supplies before your first visit. The portal is closed, and the only way to open it is to kill all five Fallen Guardians dwelling on the map: all five Ordeals contain Fallen. Once they are all dead, you may come and go as you please.

Three ghoulies - Arthur, Leonard, and Julius - hold the three skull orbs that can lower the blue key within your reach, but they each want something from you. Arthur wants a baseball bat, Leonard wants a rivet gun, and Julius wants a lighter. If you haven't yet found all these weapons on Earth, go back and look for them.

The portal is surrounded by rocky spires, the caves of which lead to isolated puzzle areas.

Chasm of Calamity. Several twisting, snaking paths jut high out of the sea of lava below. Flip three switches to raise the path to the giant skull-tree where Arthur awaits. A Fallen Guardian appears when you first reach the central rock platform, appearing above Arthur's head.

Slobberknocker Grove. Hordes of monsters teleport into this area, and later a few waves of ghosts which reanimate them. Kill the Fallen Guardian and the giant flying skulls to raise the stairs to the switch that lowers Leonard so you can talk to him (and reload your Water gun).

Donut of Death. A ring of rock encircles a pit of lava. Kill the fireguys and the Fallen Guardian that appears as you approach the Spook Bridge. The bridge comes to life if you go for the mystic urn on the central platform.

Skull Signs. Hovering over a sea of fire is an arrangement of floating blocks with skulls dangling beneath each one. Invisible bridges connect the skulls with their jaws intact; the skulls missing their jaws are decoys: approach them at your peril. The Fallen Guardian appears midway through your journey across the invisible bridges, so beware. At the end of the invisible maze is Julius.

Stairway to Heaven? Rock-jump around the plateau until you reach the top, where you will find Abdul. Talk to him to learn how to deal with the Necronomicon: collect the four Polyp Samples and use them to make the book whole again. Learning this secret summons the final Fallen Guardian.

When you grab the blue key, you will teleport suddenly to a small arena in a sea of lava, and shortly after, several vampire bosses surround you. Kill them all to teleport back to the portal and escape with the blue key.

* The vertex count without the effect of node building is 1793.