Revision as of 06:04, 3 December 2022 by XymphBot (talk | contribs) (Automated edit - Remove level stub)
(diff) ← Older revision | Latest revision (diff) | Newer revision → (diff)
A checked version of this page, approved on 3 December 2022, was based on this revision.
This level occupies the map slot MAP11. For other maps which occupy this slot, see Category:MAP11.

MAP11: Terror Core is the eleventh map of Doom 64, designed by Danny Lewis. It uses the music track "Aspects Of The Vile". The sky is a purple dark storm like sky. The goal to this level is connecting bridges, fighting lots of Hell knights and unlocking keys. The environment is set in some castle gardens which have demonic decorations. The music for this level is a dark, creepy atmospheric sound similar to the music in MAP09: Even Simpler. 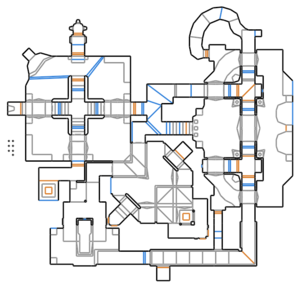 Map of Terror Core
Letters in italics refer to marked spots on the map. Sector and Thing numbers in boldface are secrets which count toward the end-of-level tally.

The map begins in a small room with a door directly in front, with a chaingun lying before the door along with a box of bullets. The door leads to a water logged aqueduct network that sits at the base of a large fortress-like complex. Collect the chainsaw waiting outside and ready for the hoard of pinkies and imps that will swarm as soon as you exit the door.

Sergeants lurk in the rear section of the aqueduct as well. After taking out all enemies in the aqueduct, press onward until you find a pair of switches at the far right end inside a niche in the rear of the aqueduct. One switch spawns the blue skull key near the map start, and the other activates a wall that automatically moves up and down at the far left niche of the aqueduct symmetrical to the right niche with the aforementioned switches. The left niche contains a super shotgun and a backpack.

Head back towards the beginning to collect the blue skull key just off to the left of the starting room. Once the blue door is accessible, beware of the opposition waiting behind it. Kill the two barons and Hell knight behind the door, and take the left path as the room branches off into three different paths. Beyond this door will be more spectres, and pick them off before proceeding right and follow the path until you reach a room infested with nightmare imps, cacodemons, and Hell knights. Dispatch them all and proceed to press the switch, which will raise the steps to the courtyard with the yellow key. You may opt to damage, or even neutralize the three barons roaming behind the torch block to minimize resistance later on.

Head back to the previous spectre room, go up the newly raised stairs, and walk through the column barrier into the courtyard beyond. Sweep the courtyard for Hell knights lurking on upper platforms and scavenge health and ammunition as needed. When you are ready, interact with the switch waiting and this will trigger an onslaught consisting of lost souls, imps, and spectres to appear. Use the BFG to thin out the horde and pick off the rest with a lesser weapon. Once the courtyard is cleared, exit the room and turn right at the bottom of the stairs. The switch in the courtyard has revealed a lift. Ride it and kill the Hell knight waiting beyond the door directly ahead.

Head to the right door and open it, pick off the Hell knight in the room across from you. A pair of mancubi will spawn on the platforms to the left once you walk past the door. You'll notice the yellow skull key sitting just to the left of them. Kill them and continue across the walkway into the door ahead, then open the door to the right to activate the switch on the wall. Return to the door you entered after lift ride, and the door inside there will now be permanently open. There is a teleport pad you can use to teleport you directly onto the platform where the yellow skull key is resting. Collect it, return to the room where you pushed the switch to open the teleporter to the yellow key, and head past the yellow door. A bunch of cacodemons and imps lurk in this area, pick them off as you walk past this area. You will find a room with red skull key at the end of the corridor. Collecting this key will cause a hoard of lost souls to appear in the lower levels. Take them out, then head back to the split path past the blue door.

If you didn't kill the three barons earlier, you will now have to face them once you open the red door. After taking them out, enter the red door room and go into the portal. The portal is surrounded by a wall which drops down when you cross the floor just outside the red door. The portal takes you to an adjacent platform overlooking the aqueduct where a couple of sergeants lay in wait. Kill them and activate either of the two switches in the niche just behind the portal to exit the map.