MAP12: Dark Dome is the twelfth level of Eternal Doom and was designed by Sverre Kvernmo. It is the last level in the first release of the wad (Eternal Doom I). 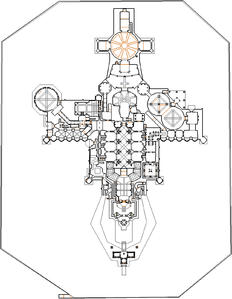 Map of Darkdome
Letters in italics refer to marked spots on the map. Sector, thing, and linedef numbers in boldface are secrets which count toward the end-of-level tally.

There are eight switches, initially unusable, that will be referred to as Y1-Y8. In some source ports, it may help to use the marker feature on the automap when you discover these.

You start outside the outer building of the castle. To raise the drawbridge, face it and then back up into the alcove of the outside building. At first this switch to raise the bridge will not be visible. You must first explore the nearby areas to the left and the right to find a switch which enables the bridge switch. There is a switch on the inside of the left pillar which raises the bridge. Note that there is a yellow key switch inside the outer buildingY1.

On the right, the moat leads to a secret containing the rocket launcher (see below).

Once you've raised the drawbridge, go across the bridge and head to the right of the main door. Enter the small hallway to the right of the main door and hit a switch to raise some stairs. At the top of the stairs there is an 'X' switch which will open the main door. At this point, you might as well look out the window and kill the chaingunner in the main hall. The small hallway to the left of the main door goes down to some railing areas with Imps in them. Kill the imps and a Hell knight in there if you want, and collect a green armor, or you can do it once you get to the part where you need the yellow key, as it has yellow key switchY2.

At the front left side of the hall, enter the first stained glass window and activate an elevator. Ride it up and take out the pain elemental. You will come to two pillars, run across them and hit the switch to open the wall in the arch-vile fireplace room, where the pillars are.

In this room (the arch-vile fireplace room) the lowered wall reveals two doors. The one on the left is locked and is guarded by a chaingunner. The one on the right goes into a hallway with a berserk pack. Go into the hallway and try to get the berserk pack. You will fall down into a pit with plenty of enemies, including Hell knights. Take them out. Note the walled off doorway, this is where the blue key is. Exit this area and you will encounter some green stairs with two revenants on them. Go up the green stairs, past a yellow key switchY3, and they lead back to those two pillars (a wall has opened where the original switch was). Drop down into the fireplace room again and go back into the Berserk pack hallway.

A switch on the right raises the trap door. Hit it, and, as the trap is raising, run across the gap. Do it while it raises otherwise you will fall in the pit again. This leads into a room with some barons of Hell on pillars. Kill them and activate the platform at the rear of that room to lower their pillars and collect the items. Off to the side of this room is a small hallway leading to an elevator. Ride it down to outside the castle. When you re-enter the castle, there is a yellow key switchY4 on the left, an elevator in front, and a corridor on the right. The corridor on the right leads back into the Berserk pack pit, but before you get in there, there is a switch on the left. This opens the small doorway which contains the blue key. Get the blue key.

If you want, go back to the room you were just in and ride up the elevator in the middle. Run across the gap into the window once you reach the top (strafe-run if necessary). There are more Hell knights. Follow the hall and activate a switch on another elevator. At the bottom is a yellow key switchY5. Go back up on the elevator and the other side of the room leads to the (now unlocked) door back into the arch-vile fireplace room.

Go back to the main hall. The blue key door is at the right rear of the main hall, where the revenant in the red/yellow upper stained glass window is.

Enter the red key door. There are some mancubi to kill here as you go down the hall. Once you get in the room, there is the yellow key door and a regular door. It is the room you could see from where you got the red key. Go to the other side of this room and into the door. Follow the greenish stairs and hallway up, fighting another arch-vile, and enter a room with a blue 'x' shape on the floor. Kill the spectres. Further on, there is another 'x' shape on the floor made out of fire in the adjoining room. An arch-vile and a revenant will come out of the fire floor so look out. A small hallway on one side is an elevator leading down to a yellow key switchY7. You might as well go down and kill the enemies there. Go back up and go through the door from the fire 'x' room. There are some shotgun guys to the left and right as you come through the door. Ahead is the room with the yellow key in it. There is a big square wall in the middle of this room. On the left there is a switch. Hit the switch and a staircase spirals up around the room. There are plenty of cacodemons here. Go all the way up the stairs and hit the switch. This activates the yellow key switches, and makes them flash.

Don't jump through the gap to get the yellow key just yet, because you will land in the lava and then burn to death because you can't escape. Now that you have activated the yellow key switches you need to go back and press them all, making it so you can activate all the switches surrounding the yellow key, which will raise the lava so you can get it. All the yellow key switches, Y1-Y8 are flashing yellow and you can press them. Go back down the stairs and enter the left side (from this point of view) small hallway. There is a yellow key switchY8 here. Watch out because new bad guys including Hell knights appear around the switches. If you want, you can strafe run across the gap to the other side to pick up some health and energy packs (the other door is only opened from this side).

Go back and press all the yellow key switches. They are labelled in this walkthrough as Y1 through Y8. Once you have activated them all, go back to the yellow key room. You can now press the skull switches (which correspond to which yellow key switch you have pressed so far). The ones that are flashing are active, meaning you've pressed the corresponding switch in the level. Each of these switches raises the lava a bit and when you have pressed all eight, you can go to the top of the stairs and get the key without burning to death. Note that the Cyberdemon will respawn in the red key door/red key room when you hit Y6. Also, in the berserk pit, you can now access the megasphere. Once you have the yellow key, go through the yellow key door (through the red key door, and then on the left).

Open the yellow key door to reveal a teleport. Go through the teleporter and fight the cyberdemon. He teleports around a lot so your best bet is to wait in a corner and wait until you hear him in the cage right next to you then blast him with your BFG. Once he is dead, hit the red switch. This opens up one of the 'scream' switches. You have to shoot these switches. Once you shoot them all you have access to the cyberdemon's cages. One of them (in the red key room actually) has a switch in it. Hit the switch to open the exit teleport. Teleport around (or drop down and re-enter the yellow key teleport and go back into the cages) until you get to the cage with the teleport in it. Enter the teleport and finish the level.

A baron of Hell (Thing 177) is outside the walls of the map.

* The vertex count without the effect of node building is 3866.

"...Darkdome (Map 12) took me almost 2 years to do from start to finish."
― Sverre Kvernmo[1]
"I had a heap of problems with both Nucleus and Darkdome, because of the limitation of the save-game buffer. Both levels were about 20% bigger at their largest state... so those two levels are a study in how much you can cram into a Doom level and still having it run stable. If you load up the maps in an editor you'll see that all of the "effect-sectors" outside of the normal map are triangles, not squares. The reason for this is simple, a triangular sector takes up less memory than a square one, having one less side-def. Similarly I would axe "three stim-packs and two hellknights" to add "25% health-box and a Baron" instead, just to save the space."
― Sverre Kvernmo[2]

Darkdome was the main influence on the map MAP28: Ogdoad (Epic 2).