Revision as of 11:19, 3 April 2022 by XymphBot (talk | contribs) (→‎Speedrunning: Automated edit - Update DSDA map records)
(diff) ← Older revision | Latest revision (diff) | Newer revision → (diff)
A checked version of this page, approved on 3 April 2022, was based on this revision.
This level occupies the map slot MAP13. For other maps which occupy this slot, see Category:MAP13.

MAP13: Annihilation Invention is the thirteenth map of Community Chest 2. It was designed by Jeffrey Graham (psyren). Another version of this map is in Crimson Canyon: MAP03. 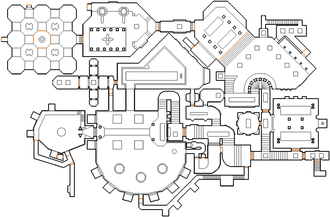 Map of Annihilation Invention
Letters in italics refer to marked spots on the map. Sector, thing, and linedef numbers in boldface are secrets which count toward the end-of-level tally.

Through the first door, head right and right again. You will be in a hallway that serpentines around. Avoid the nukage straight ahead and go right as much as you can. until you reach a angular room with a nukage pool. Take the door to the west and press the switch at the end to raise a bridge in the large nukage-filled area south of the angular room. Go back to the serpentining hallway and take the door. You should see a super shotgun here, and the hallway takes you to the bridge. Flipping the switch on the wall close to the radiation suits opens the door at the other end of the bridge to the next room. Follow the path in this room until you get the blue keycard, then backtrack all the way to the entrance hallway. Enter the blue door to the north, and after taking care of the opposition in this room, the switch you need to reach is on one of the south walls. It is on the same level as the light amplification visor. From the visor, go around the metal bars close to where you entered and when you flip the switch, the door on the opposite end will open. Enter it, and at the fork go left and up the staircase. The switch here opens the door on the far left. In this room, you cannot reach the yellow key yet, so go into the next room. Here there is a soul sphere in the middle and an invulnerability on your left. Approaching the soul sphere causes columns to lower and another switch is revealed in a western alcove. Hitting this switch lowers more columns as well as the yellow key. To leave this room to get the key, you have to press another newly revealed switch on the north wall. Now get the key and backtrack all the way to the beginning and locate the yellow door. The red key is just inside this room, although there will be a lot of monsters in here. The red door leading to the exit is right next to the yellow door.

* The vertex count without the effect of node building is 2011.