MAP14: Mountains and Mortar is the fourteenth map of Community Chest 3. It was designed by Matt Grieshober (Soap on a Rope), and uses the music track of Heretic E1M9: The Graveyard. 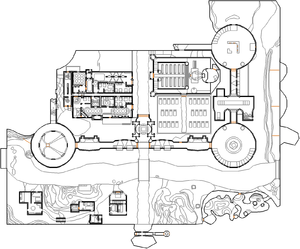 Map of Mountains and Mortar
Letters in italics refer to marked spots on the map. Sector, thing, and linedef numbers in boldface are secrets which count toward the end-of-level tally.

* The vertex count without the effect of node building is 7381.

This level contains recreations of two video game consoles. In the building at the southwest of the level, there is an Xbox and a Super NES sitting side-by-side. In the building containing the cyberdemon, the room at the southeast contains another Super NES, hooked up to a television showing the player idling on Doom E3M4: House of Pain.

In the graveyard, there is a grave with a gibbed corpse on the top of the burial plot, with "Your Mom" engraved on the tombstone.