Revision as of 09:10, 1 August 2022 by XymphBot (talk | contribs) (→‎Speedrunning: Automated edit - Update DSDA map records)
(diff) ← Older revision | Latest revision (diff) | Newer revision → (diff)
A checked version of this page, approved on 1 August 2022, was based on this revision.
This level occupies the map slot MAP15. For other maps which occupy this slot, see Category:MAP15. 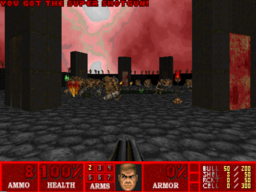 A gang of mancubi led by an arch-vile awaits your entry.

MAP15: Gates to Hell, designed by Yonatan Donner, is the fifteenth map of Hell Revealed. It uses "How'd I do?," the intermission screen music from Rise of the Triad.

The central area has 8 teleporters, each of them leading to a different place. All of those 8 destinations are connected and when you've been to two adjacent ones you can pass between them freely. You have to lower nearly all teleporters and find all keys to get to the exit. To get to the secret exit you will have to find 3 separate secrets and lower a special teleporter. In the start, try a shot in the dark...

The central part of the map, with the portals, looks like Heretic's E2M8: The Portals of Chaos. 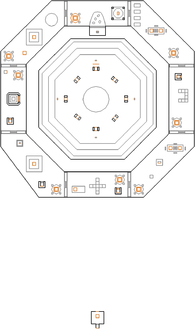 Map of Gates to Hell
Letters in italics refer to marked spots on the map. Sector, thing, and linedef numbers in boldface are secrets which count toward the end-of-level tally.

When you enter the map from the starting teleporter, you will appear in a central area which functions as a hub. There are lots of mancubi on ground floor, plenty of imps on the ledges, and an arch-vile in the central damaging pool. Eight walls surround the toxic pool, and they are warps leading to the ringed areas around the central hub. Your first order of business is to take the northern warp. A switch appears when you approach the northern warp from the northern side. Press it so you can use the warp to go to the northern part of the ring.

For portions of the ring area, the walls contain Hell knights and barons of Hell. Also, the small shacks that usually require a key contain an arch-vile and a switch that opens up the warps in the central hub. Pressing the switches inside the shacks also teleports a cyberdemon into the central hub. When you enter a particular section, you also inadvertently open up half of the doors in the ring area. This means that, for example, if you visit the eastern section of the ring and the northeastern section of the ring, you open both sets of doors blocking access to both sections, allowing you to travel through the ring sections without teleporting. Both the normal exit and the secret exit require three barriers to be lowered, and a chaingunner resides on the exit teleporter for both exits.

In this area you will have to contend with revenants, as well as an arch-vile sitting underneath a crusher where a switch is. Make sure to pick up the rocket launcher in this area. The switch under the crusher has two sides, and flipping both sides reveals switches back in the central hub, opening the west and east warps. Also in the north ring area is one of the switches revealing the secret exit, should you wish to go there.

A few cacodemons are present here, and there is also a staircase full of revenants and boxes of rockets. At the top of the staircase is the blue keycard. There is also the red door here, which has a switch that opens the southeastern warp in the central hub.

Several shotgun guys are scattered in this section. Press the satyr switch near the teleporter and you will get the yellow keycard. The central building in this section houses an arch-vile, imps, a plasma gun, and lots of cell ammo. The shack to the south of that building has the blue door, and the switch inside reveals the northeastern warp.

You can see the secret exit here and a berserk pack. A small set of steps with arch-viles on them lead to the red skull key, so make sure you grab it, then return to the eastern part of the ring (which you can directly access now) to open the red door so you can access the southeastern warp.

A lot of demons will attack you when you teleport in. Make sure to kill them and grab the chaingun as well. The normal exit can be seen from here, and there is a switch you need to flip, which reveals a switch in the central hub which opens the southern warp.

Press the switch and then enter the southern warp from it's southern side. A megaarmor is on top of some steps, and it may prove useful against the chaingunners present in the area. The shack here requires a yellow key, and the switch inside reveals the southwestern warp.

There are Hell knights and a pain elemental here, so kill them. The teleporter that the pain elemental was on leads to the normal exit, and it should be clear of barriers after you had went through the color-key doors and pressed the switches inside. If, however, you wish to go to the secret exit, you will notice a switch behind a cage. If you shoot this switch, the shack behind you will open, with an arch-vile and another switch to press. This switch opens up the northwestern teleporter.