Difference between revisions of "MAP15: The Twilight (The Plutonia Experiment)"

MAP15: The Twilight is the fifteenth map of Plutonia. It uses the music track "Waltz of the Demons" (from Doom's E3M7: Limbo and E2M7: Spawning Vats). 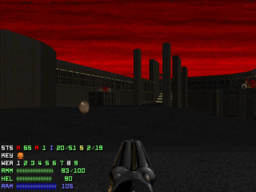 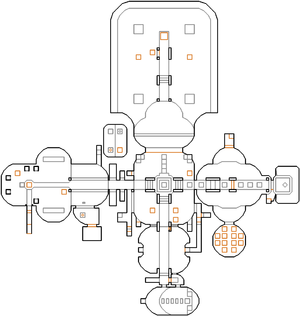 (1) Near the beginning of the level, you will cross a gated bridge with a super shotgun on it. At the far end of this bridge is a short wall with a yellow lightning-bolt symbol on it. Open it to reveal a switch in an alcove (you must actually walk into the alcove for the secret to register). (2) Flipping the switch in secret #1 causes a wall to open back on the other side of the bridge. Behind it is a crescent-shaped ledge with a box of rockets. (3-8) Inside secret #2 is a "stairway" of pillars leading up to a megasphere. All 6 steps count as secrets. Oddly enough, the ledge with the megasphere does not count as a secret itself. (9) In the center of the level is a "T"-shaped walkway crossing a pool of blood. Drop into the blood north of the walkway. To the left is an alcove with a teleporter in it; step into it. You'll arrive on a ledge with a soul sphere, backpack and plasma rifle, but instead of getting those items, remain on the teleporter pad you're on. Do a 180 and open the lightning-bolt wall. It leads to a secret path lined with health bonuses. (10) Return to the ledge from secret #9, but get the items this time. The ledge counts as a secret. (11) While still on the ledge from secret #10, you'll see another lightning-bolt wall near the teleporter. Open it to reveal a BFG9000. (12) While still on the ledge from secret #9-11, you'll see a medikit on a pillar in the blood pit to the west. Fall onto it by running from the ledge. (13) If you land on secret #12, an alcove in the blood pool below will open. Inside is a invulnerability sphere. Grab it before you teleport out of this area. (14) Back on the "T"-shaped walkway in the center of the level, drop into the blood pit to the southwest by squeezing between two walls. There is another alcove with a teleporter in it down here; the alcove itself counts as a secret. (15) The ledge you arrive on by taking the teleporter in secret #14 also counts as a secret. (16) On the ledge from secret #15, there is a short wall with pipes on it to the right. Open it to reveal yet another secret teleporter. (17) The teleporter from secret #16 takes you to an otherwise unreachable platform. The room behind the door on this platform counts as a secret as well. (18) Back at the "T"-shaped walkway in the center of the level, follow the path to the west. If you landed on the pillar from secret #12, two alcoves in the walls (just before the path leads outside) will have opened. The one on the right counts as a secret. (19) At the west end of the map is a fairly narrow walkway leading to a switch. Walk to the switch and turn back the way you came. You should see two bloodfalls to either side of the walkway. You must run from this walkway onto the one to the left (north). There is a narrow passage in the wall leading to a soul sphere.