Revision as of 06:04, 3 December 2022 by XymphBot (talk | contribs) (Automated edit - Remove level stub)
(diff) ← Older revision | Latest revision (diff) | Newer revision → (diff)
A checked version of this page, approved on 3 December 2022, was based on this revision.
This level occupies the map slot MAP16. For other maps which occupy this slot, see Category:MAP16.

MAP16: Blood Keep is the sixteenth map of Doom 64, designed by Randy Estrella. It uses the music track "Warped Hive", also heard in MAP02: The Terraformer. The level itself is exploring a huge keep and fighting large waves of monsters and tricky puzzles and finding the exit. 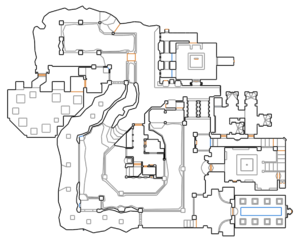 Map of Blood Keep
Letters in italics refer to marked spots on the map. Sector and Thing numbers in boldface are secrets which count toward the end-of-level tally.

The level begins with a small, rectangular room with a door to the right. Open the door and kill the zombiemen. Carefully leave this room as there are nightmare imps and cacodemons to the right just outside. Open the door in the room the zombiemen were in, but afterward, turn around and run backwards. A wall will rise up to reveal more zombiemen. Kill them, and look for shotgun laying in a corner of this room. Leave this room, and go into the room with the rising walls and pick up the zombiemen's weapons for ammo. If low on health, there is a medikit here as well.

Next, head toward the window with the nightmare imps and cacodemons outside and snipe them with a rapid fire weapon, such as the chaingun or plasma gun. The hail of projectiles in this area can be dangerous. Use the wall on your left as cover, or use continuous movement to avoid damage. Once you have cleared the area, turn around and pick up some shotgun shells in the left corner of the other side of the room. Then go back, but turn right, and there will be a yellow face on the wall. Use it, and a window will open at the location you obtained the shotgun shells.

After the cacodemons are dead, equip a rapid fire weapon or the rocket launcher and shoot the imps and nightmare imps in the blue-shaded rooms.

Once you enter the exit room which has eight pillars, the room will go dark as all of the pillars ceilings lower, and zombiemen, accompanied by lost souls, will spawn into the pillars moments later. You must kill them to be able to reach the exit, which is blocked by a gate. Make sure you remain in the middle of the room, as the outer floor will lower and fill with lava after you have killed all the enemies inside. If you are not careful, you will fall into the inescapable lava pit and die. The gate blocking the exit will open after the outer floor has lowered.