MAP16: The Forgotten Base (Community Chest 4)

Revision as of 11:24, 3 April 2022 by XymphBot (talk | contribs) (→‎Speedrunning: Automated edit - Update DSDA map records)
(diff) ← Older revision | Latest revision (diff) | Newer revision → (diff)
A checked version of this page, approved on 3 April 2022, was based on this revision.
This level occupies the map slot MAP16. For other maps which occupy this slot, see Category:MAP16.

MAP16: The Forgotten Base is the sixteenth level of Community Chest 4. It was designed by Keeper of Jericho and uses "Waiting for Romero to Play," a music track from Doom II by Robert Prince. 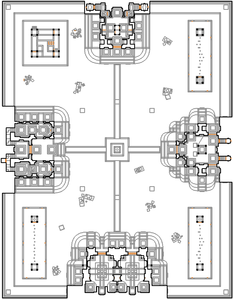 Map of The Forgotten Base
Letters in italics refer to marked spots on the map. Sector, thing, and linedef numbers in boldface are secrets which count toward the end-of-level tally.

The Forgotten Base is a rather compact slaughter map with a few tricks up its sleeve - most of the monster hordes you will face are composed of a single type of monster, making monster infighting impossible. With most of the health and ammo in the level concentrated in one place that may not be the easiest to get to, you will need to keep a close eye on your health - and be prepared to keep one group of monsters alive so that they can fight another group!

All three skull keys are required to exit. The red and yellow skull keys may be acquired in either order, but acquiring the blue skull key requires opening the way to the red one first. This guide will follow the numbers on the buildings in proceeding (red, yellow, blue).

You begin on a Plutonia-style teleporter and get a free megasphere right off the bat. Surrounding you is a sizable group of monsters facing away from you:

Four mancubi and up to eight cacodemons are going to come trickling in from the edge of the map. First, jump off the starting point and collect the shotgun to the north and the super shotgun to the south of the starting point. Now, you just need to run rings around the monsters until most of them are busy aiming at each other (and not you). Make a break for the building in the south (marked "I"). This building has two doors leading to a pair of chambers. Go through both to collect the backpack, megaarmor and all the ammo you can carry. As you collect keys, more powerful weapons will be made available to you in this building, Return here if you need health too - there are 16 medikits available.

Next, head to the building in the west (marked "II"). Inside here, there are five arachnotrons (three on Hey, not too rough and below). Use your super shotgun to puncture them through the windows. Head inside, then take either corridor around. Each corridor has three zombiemen (two zombiemen and a shotgun guy on Ultra-Violence and above). Each corridor leads to a room where the arachnotrons were. Flip the skull panel at the end of each room.

As you head back outside, up to 12 Hell knights will teleport into the main area. An arch-vile will teleport to each corner of the perimeter wall too. You might want to save your ammo first. Quickly make your way to the northwest corner to find a wooden structure in a pool of water. Climb up via the ladder on the north side, and follow the path into the red teleporter. This leads to a tower in the southwest corner. Run across the metal poles to the red key. This one is easy, because the poles are all aligned in a straight line, but do watch for the arch-vile in this corner while you are at it.

Collecting the red key will cause up to 40 imps to teleport into the main area. Now you have two different types of monsters that can infight. Run rings around them until most of them are attacking each other and not you. Go to the southern building again and go through the right door. Use the switch next to the corner filled with rockets to open access to the rocket launcher at the back of the room.

Now that you have a rocket launcher, you may want to go to each corner of the map and clear the arch-viles on the perimeter wall out. It will help when you collect the next two keys.

Head to the building in the east (marked "III"). Open the door and you will be immediately set upon by a Hell knight (Hey, not too rough and below), three Hell knights (Hurt me plenty), or two Hell knights and a baron of Hell. Behind them will be up to nine shotgun guys - they won't be much use in infighting here, so just dispose of them too. The cyberdemon in this room cannot see you yet. Head to the back of the room and open either wooden door. Each leads to a small alcove with an imp and a switch. When you flip the first switch, the cyberdemon will now be able to see you - quickly move to open the other door and flip the switch too. Once done, grab the soulsphere and get out of there before you eat any unnecessary rockets. If you choose to use the side exits, watch for a chaingunner in a nearby alcove. To kill the cyberdemon safely, pump rockets through the windows on either side of the building.

Up to eight mancubi and two revenants will teleport into the main area. Unlike the previous group of monsters, you will want to deal with this group of monsters first. Use the rocket launcher to put a quick end to them. After this is done, head to the structure in the northwest and climb up onto it again. The path to the yellow teleporter is open - head into it. This leads to a tower in the northeast. Unlike the previous key, the poles are in a staggered order. You will have to carefully make your way across them to get to the yellow key.

Collecting the yellow key will cause up to 10 arachnotrons to teleport into the main area. Again, they are easy meat for rockets. Go to the southern building again and go through the left door. Use the switch next to the corner filled with energy cells to open access to the plasma gun at the back of the room.

Head to the building in the north (marked "IV"). Peek in and pull the baron of Hell in the back outside, then kill it. Next, use your rocket launcher to take out the two arch-viles in the back. If you are playing on Hurt me plenty and above, quickly run in and run out to pull two revenants waiting in ambush out into a more favourable position. Finally, head into the building and puncture the two chaingunners waiting on each side.

In the center of this room is a pair of teleporters. Enter each one, then go through the next teleporter to access each of a pair of isolated corridors at the rear of the room. At the end of each one is a door. Open it, kill the imp (Hell knight on Ultra-Violence) inside and flip the switch. Head back down the isolated corridor to be teleported back to the main part of the room.

After flipping both switches, up to four arch-viles will teleport into the main area. This is a big problem, because there is a pile of dead monsters there for them to resurrect, and the main area does not have much cover. Your best bet is to hurry to the northwest corner, where the structure is your most reliable cover. If you get attacked along the way, hug a pile of crates. Climb up onto the structure again. The path to the blue teleporter is open - head into it. This leads to a tower in the southeast. The poles here are also in a staggered order, so you will still have to carefully jump from pole to pole to get to the blue key.

Collecting the blue key causes up to two cyberdemons to teleport into the main area of the level. If you wish to kill them, head through either door in the southern building and press the switch next to the blue bars to allow access to a BFG9000, which you can shotgun the cyberdemons with.

Head back to the northwest and climb back up to the structure. Proceed along the same route to the blue teleporter, but instead of going into it, raise the three sets of colored bars, then turn right. Use the skull panel to the right of the end of the path to end the level.

* The vertex count without the effect of node building is 6277.