Revision as of 10:01, 2 May 2022 by XymphBot (talk | contribs) (→‎Speedrunning: Automated edit - Update DSDA map records)
(diff) ← Older revision | Latest revision (diff) | Newer revision → (diff)
A checked version of this page, approved on 2 May 2022, was based on this revision.
This level occupies the map slot MAP16. For other maps which occupy this slot, see Category:MAP16. 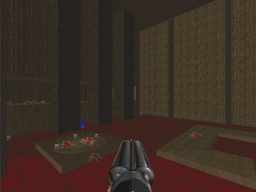 A large level full of baddies

MAP16: The Path, designed by Yonatan Donner, is the sixteenth map of Hell Revealed. It uses "Watz Next?," the ending music from the shareware version of Rise of the Triad.

An underground level. First make the way to reach the bridge, and then get the two keys you will need in order to leave this bloody realm of danger and fear and rise to the surface...

Map of The Path
Letters in italics refer to marked spots on the map. Sector, thing, and linedef numbers in boldface are secrets which count toward the end-of-level tally.

This map has a lot of damaging floors, but also holds a lot of radiation suits necessary if you need to cross for any reason. The solid ground of the map leads to a number of places, and barons of Hell walk around on this path. Grab the super shotgun at the beginning and drop on the path. The path branches off to three areas, the one on the right leads into a room with a rocket launcher and a teleporter back to the starting point. If you take the path straight ahead, you will find two more openings. The one that is directly on the path to the northeast has a teleporter leading to an opening above the path with arch-viles and a plasma gun. The one across the damaging blood has some blue bars blocking a switch (remember these for later) and a door. Open this door and kill the arch-vile, then press the switch here before returning to the path.

Back at the path that branches off in three directions, go westward. At the break in the path, you will see an opening to the north. Head through this opening (it would be wise to pick up a radiation suit before heading through the opening) and you will find another branching path with revenants on it. There is a switch on the left branch, which you should press. If it isn't there, go back to the room with the single arch-vile and press that switch to make it appear. The other branching path here has red bars blocking another switch; again, remember this one for later. After pressing the switch you can press here, return south, and keep heading down and then east, looking out for barons of Hell as well as mancubi on the walls above. As you approach the teleporter, parts of the path will sink into the blood, so hurry across if you do not have a radiation suit on.

When you enter the teleporter, there should be some stairs leading up. If they are not there, you need to press the switch on the branching paths where the revenants are. There are a lot of spectres, imps, demons, and a spider mastermind on this path, and on the ledge where the demons are, are three separate paths. Each path is barred, but the bars lower when you approach them. The right path is optional, but holds a secret as well as a berserk pack. Take the left path to find some arachnotrons, imps, and an arch-vile. The red skull key is here, but look out for the trap that springs upon getting the key. Now take the middle path, and you will find two teleporters. Enter the right one to be teleported to the ledge at the southern part of the map where the mancubi were located. Follow this ledge all the way to the blue skull key and the door. Opening the door also opens a closet nearby with an arch-vile and some supplies, and the door you opened eventually leads back to the starting point.

Now that you have both skull keys, return to the color bars that you should have took note of, but look out for the barons of Hell who have teleported onto the paths. Pressing the switch behind the blue bars raises some stairs in the exit room (allowing access to the exit), and pressing the switch behind the red bars raises a lift that you can use to reach the exit room. Inside the exit room are some cacodemons, so make some noise here if you intend to kill them; otherwise, enter the exit teleporter.