MAP16: Tower of Babel, also known as MAP16: Hell Gate, is the sixteenth map of most console versions of Doom, designed by American McGee. It first appeared on the Atari Jaguar, and later appeared in the 3DO, Game Boy Advance, Sony PlayStation, and Sega Saturn consoles. It is completely different from the map of the same name in the original PC version of Doom. The PlayStation and Saturn versions go by the name of "Hell Gate", as they already feature the level conversion based on PC's E2M8, Tower of Babel. 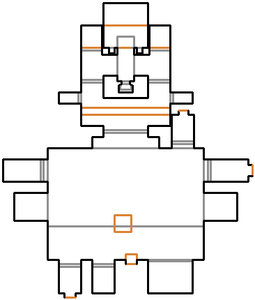 There are no keys in the level. In the starting room, take a soulsphere and a megaarmor in front of you, and there will be a door opening sound. Drop ahead to the room below. Pick up the plasma gun and take either left or right. Come closer to the wide door ahead that leads to the south. This will open revealing you a large south area where the major action takes place. However, two doors behind you will lock preventing you access to the initial area and two alcoves containing demons will open. Kill them and enter the alcoves where they waited in ambush, and you will find a shotgun and a box of shells.

Taking the berserk pack in the southern area will open one of the doors containing a baron and demons (or no one on I am a Wimp or Not Too Rough skill levels). The barrels surrounding it can be accidentally destroyed by the imps in the nearby alcoves, so it is advised to kill them first and spare the barrels for packs of hellspawn that will be unleashed later.

The button at the south of the southern area actually unlocks the northern area (as mentioned above, it is enough to approach the switch without pressing in order to make progress on the level). Return to that northern - starting - area to discover two open doors containing ammo and, in one of them, a rocket launcher.

On the PlayStation and GBA releases, the two demons in the south-western alcove, guarding the switch that opens the exit door, cannot see the player unless they make a noise or step into the ceilinged area in front of the alcove.

The Jaguar and PlayStation releases have identical layouts. The PlayStation and Saturn versions add an exit sign above the exit switch, as well as slightly increasing the switch's width.

On PlayStation, the animated fire sky is used in this level even though it is technically set on Deimos. Earlier console ports use the red sky and mountains seen in other Deimos levels.