Revision as of 10:02, 2 May 2022 by XymphBot (talk | contribs) (→‎Speedrunning: Automated edit - Update DSDA map records)
(diff) ← Older revision | Latest revision (diff) | Newer revision → (diff)
A checked version of this page, approved on 2 May 2022, was based on this revision.
This level occupies the map slot MAP17. For other maps which occupy this slot, see Category:MAP17.

MAP17: An Eye For An Eye is the seventeenth map of Hell Revealed II. It was designed by Yashar Garibzadeh and uses the music track "Risen from the Dead," by Petter Mårtensen (Thyrbse). 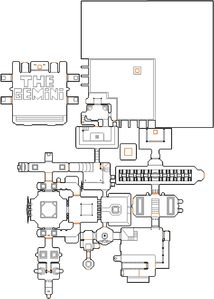 Map of An Eye For An Eye
Letters in italics refer to marked spots on the map. Sector, thing, and linedef numbers in boldface are secrets which count toward the end-of-level tally.

For those pistol starting this map, you will need to watch your ammo and health reserves. Although this map does not have as many monsters as some of the levels before it, the low amount of supplies actually makes it harder than some of those maps.

Immediately take out the imps that attack you right at the start. Get out of the enclave and pick up the super shotgun, looking out for the cyberdemon (or four barons of Hell on Hey, Not Too Rough or lower). There are two doors near the cage, and since the one on the right requires the red key, open the left one. Kill the baron of Hell and Hell knights in the hallway and grab the rocket launcher just before the next door. Open it, and fight some imps straight ahead. Flipping the switch to the right reveals a room with barons behind you. Kill them and hit the switch in their room to lower the other switch. The next room you come to has more barons, and a blue door. To the left of the door is a passage leading to a room with imps and a pain elemental. Entering this passage, you will see the blue skull key on a metal pillar. Head down to the grass and go through the tunnel where the pain elemental was, killing the Hell knights in the next room. Press the gargoyle switch at the top of the steps to reveal two new passages in this room; one just contains arch-viles, while the other loops around their room to another switch. Flip this one, then as you are heading back (look out for chaingunners), you will find another switch to flip, which removes the gargoyle switch. Go through the passage it was blocking and you will wind up back at the blue key yard, with some revenants running around. The blue key will also rise up, but do not worry. Climb the steps to the ledge from where you first entered the area and go around, where an arch-vile guards another blue key which you can take.

With blue key in hand, open the blue door you saw earlier and head down and south, past some chaingunners. In the small room with a fountain of blood, you might find revenants or Hell knights to your left, depending on your skill setting. You cannot open the door behind them, so take the other passage in this room. Kill the mancubus here and press the switch to open the door. Pressing the next switch you see actually closes the one behind you, but there is a switch on this side as well. It opens a room behind you with arch-viles. Hitting the next switch opens your way out and an alcove to the right as well, with an arch-vile and yet another switch, which will open the door on the other side of the blood fountain. Climb the steps getting rid of chaingunners along the way. Drop into the ditch killing barons of Hell and revenants, then rid the lift up to the ledge where the chaingunners were. Press the satyr switch at the other end of the ledge to lower it, then jump to get the yellow skull key. Look left for some arch-viles, and be careful when heading out as other enemies will be teleporting into the yard as well.

After flipping the switch near the yellow key door, you will open it and also open the door just next to it as well. Inside, you will be locked in with a few mancubi. You can open the next door, but you need to get rid of two sets of bars. Two gargoyle switches inside the mancubi room will remove them, but you will have to fight an arch-vile and a baron of Hell upon pressing them. Now go north into a blood channel. The red key is in front of you, so take it. However, the door ahead is locked, so you will have to explore the blood channel. On the left side are arch-viles and a BFG9000, and on the right side are pain elementals and a satyr switch to open the door. Through this door, kill the arch-viles and caged barons and teleport out.

You will wind up back at the starting point. Now that you have the red key you can open the red door (if you have not killed the cyberdemon before, then you might as well do so now). Kill the baron and Hell knights beyond the door, and get the plasma gun just before the next door. More barons are in the next door, and pressing the skull switch exposes you to revenants and Hell knights. Behind the skull switch is an arch-vile guarding a gargoyle switch, which removes the barriers blocking a teleporter (guarded by barons of Hell). Entering this teleporter, you will come into an open field, where you will tangle with two cyberdemons. To exit, hit the switches behind them and you will lower the barriers to the exit teleporter.

When you reach the ledge that overlooks the lava (it is the first area you come to with arch-viles), go towards the first switch on the ledge. As you do, look at the wall just to the right and you will spot a damaged section of wall jutting out. You can use this ledge to hop the fence into the lava, where there will be a few demons. Enter the teleporter to reach a small room with a cacodemon and some energy cells.