Revision as of 12:17, 21 February 2022 by XymphBot (talk | contribs) (→‎Speedrunning: Automated edit - Verify no DSDA map records; rm empty Misc section)
(diff) ← Older revision | Latest revision (diff) | Newer revision → (diff)
A checked version of this page, approved on 21 February 2022, was based on this revision.
This level occupies the map slot MAP19. For other maps which occupy this slot, see Category:MAP19.

MAP19: Asteroid Assault is the nineteenth map of Interception II. It was designed by DFF and uses the music track "". 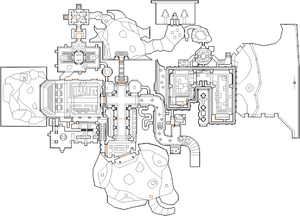 Map of Asteroid Assault
Letters in italics refer to marked spots on the map. Sector, thing, and linedef numbers in boldface are secrets which count toward the end-of-level tally.

Two shotgun guys (Things 750 and 1092) in the south-east monster caches have no flags set for any of the three difficulty classes, so they do not actually appear in the level. They are at the same spots as heavy weapon dudes on skill 4-5, so probably were intended to appear on lower skills.

* The vertex count without the effect of node building is 6107.