Revision as of 04:28, 22 October 2022 by Zokum (talk | contribs)
(diff) ← Older revision | Latest revision (diff) | Newer revision → (diff)
A checked version of this page, approved on 22 October 2022, was based on this revision.
This level occupies the map slot MAP19. For other maps which occupy this slot, see Category:MAP19. 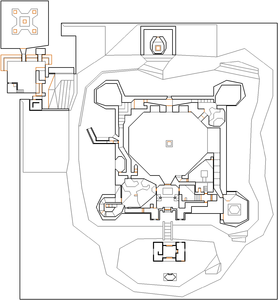 Head into the building in front of you (north), and from here head into the room to your right (east) and flip the switch on the southern wall. From here head back out into the centre room of this small building, and head out the door to your right (north) and over the bridge to the citadel. Enter the citadel from this door in front of you, then head up the stairs on the left (west) side and open the door with the demon face on it. In this room, flip the switch in front of you, then turn around and go through this door that has just opened (north). After going through this door, head down the first right (east) and through the door. As soon as you try pick up the supercharge, you will be teleported to the southeast corner of the citadel. After you shoot the back wall of the western nook with a hitscan projectile, a platform will start to rise. If you are not on it, then you will need to wait for it to raise fully so you can activate the switch on it. This will cause the platform you teleported to to come down to your level, so you can use it to jump across. After you head through this door, continue down to the end of this hallway to pick up the red skull key.

From the opening of the courtyard, head left (south) to the only door exit. Once back in this entrance way, head right (west) and back into this room with the switch. Flip it again and head through the same door behind you (north). Head straight through this hallway until you see an opening to the outside. Do not go out it, but instead open the secret door just before it. There will be armor in here, and behind it is a lift that you will need to activate. Once at the top of this lift, continue down this hallway until you get to the opening. Aiming at the centre of it, you will need to sprint out this window and hopefully onto the ledge. Drop down into the water, and head into the entrance way in the corner (north) of the building in front of you. Being careful of the crusher, you will need to get past it and left (south) up the little tower in the corner. Activate the switch in here, which will cause lots of imps to spawn, and then head north through either of the new door openings. You will now see five teleporters, of which you will need to head into the far right (northeast) one. From this room, head straight out the only opening and down again to where the blue skull key sits.

You will now be back in the central courtyard. Head straight (south) out the only door again, and then from the entrance way continue heading out of the citadel out the south door. Head left (east) and continue around the Citadel to the north side until you get to a grey building. Head into this building and around to the back (north side) of it, and from here open the blue and red bars. Step on the lava pool to finish the level.

Sector 250 is not closed, you can look out of bounds from below through the broken linedef 636.

If one has only the red skull key it is still possible to get to the exit if one uses a guideless glide after opening the red bars in front of the exit.

From the ledge with the red skull key it is possible to perform a jump over to the small alcove with the blue skull key which is enough keys to let one finish the map without using glides.

It is possible to get into the outside red building by using a wobble glide through the gap between (sector 6) and the southernmost set of torches meant to block you from coming into this area from this location.