Revision as of 09:51, 1 June 2022 by XymphBot (talk | contribs) (→‎Speedrunning: Automated edit - Update DSDA map records)
(diff) ← Older revision | Latest revision (diff) | Newer revision → (diff)
A checked version of this page, approved on 1 June 2022, was based on this revision.
This level occupies the map slot MAP22. For other maps which occupy this slot, see Category:MAP22. 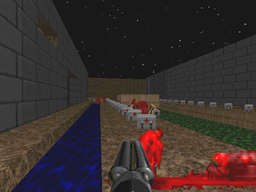 The central river of nukage

MAP22: Resistance is Futile, designed by Yonatan Donner, is the twenty-second map of Hell Revealed.

A small outdoor level. Many enemies to slaughter freely with all the weapons, much health and ammo. As long as you don't die - enjoy the fragfest!

Watch Daniel's lmp for this level to see how well it can be done - that is the way I designed the level to be played, not by hiding behind corners. 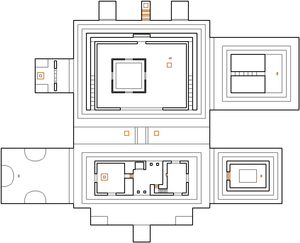 Map of Resistance is Futile
Letters in italics refer to marked spots on the map. Sector, thing, and linedef numbers in boldface are secrets which count toward the end-of-level tally.

Because of the high numbers of very tough monsters found in this relatively small level, it is practically impossible to complete the level by running past the opposition. Most of the time players will need to clear their path before proceeding.

At the start take all weapons and health bonuses. Straferun quickly to the right or left to avoid being blasted by arch-viles. Demons will block the way forward so use BFG9000 to clear a path to the nukage river. Find a gap between the barons and run into the nukage, then run for the bridge in the center. A teleporter in the nukage will transport you onto the bridge, telefragging the cyberdemon. It's possible for the cyberdemon to avoid being telefragged, so try and time using the teleport for when it's directly in the center of the bridge. BFG a path through the mancubi then run north to find a pack of revenants. Kill these with BFG, strafing left to right rapidly to avoid revenant missiles, and getting close as possible to the revenant pack to maximize BFG damage.

When the revenants are taken care of switch to rocket launcher, then head back down the north-south passage and take out the mancubi and barons from a long distance. When this is done you can run down to the nukage river and take out the group of barons on the other side of the bridge with rocket launcher also. In the building opposite the river is a high room on the left hand side, in which you may be able to see a cyberdemon. It can be destroyed safely from this location with rocket fire. You can also run into the high room and take it out at close range with the BFG, but this is very risky.

Head around the outer side of the south building, taking out the pillars of arch-viles in the southeast and southwest corners of the map using rockets. In the south building is a room containing barons and arch-viles, kill them from the outside also with rocket launcher. Enter the room, take the yellow key and whatever ammo you need, then switch to BFG and kill the two arch-viles outside the room on the left.

Cross the nukage bridge, then run up the stairs on the north building. Before rounding the corner fire a rocket to wake the revenants and kill them one by one as they approach the corner. Head down the passage and turn south. On your left will be three spiderdemons, run past them and hit the switch. Walls will lower revealing four cyberdemons. Run to the south and jump down in front of the nukage river, then provoke infights between the spiderdemons and cyberdemons from a safe distance. As they're fighting run back up the stairs, hide in the northwest corner to draw the monsters as close to it as possible, then run into the room again. Use BFG and circle-strafing to kill the cyberdemons and spiderdemons, then take the red key. A trap will open up in the passage you just left revealing three arch-viles, so kill them with the BFG as well.

Run back to the high room in the south building and hit the switch. A wall outside will lower revealing revenants, take them out with rockets then use BFG on the cyberdemons in the newly revealed building. Hit the switch and another wall will lower in the southwest corner of the map. Again use rockets from long distance to take out the mancubi, then clear out the cages one by one.

The next switch lowers a wall in the northeast corner of the map, among many of the monsters revealed are arch-viles and pain elementals so hang back by the nukage river and take the monsters out as they appear with rocket or BFG. Be alert for the possibility of monsters catching you from the rear. Run up the stairs to the northeast platform and hit the switch, this lowers a wall in the northwest corner of the map concealing four cyberdemons. Fire a shot to wake them up then retreat over the nukage bridge to the southern half of the map. From long range use rocket launcher or BFG to take out the cyberdemons in a pack.

Head back to the northwest corner of the map, kill the four arch-viles guarding the blue key, and take it and the megasphere. Some rooms will open up in the northern edge of the map revealing a large number of chaingunners, run past them to the locked door in the middle of the passage. Open all three locked doors and exit.

Resistance is Futile was the main influence on MAP32: No Guts No Glory (Alien Vendetta).