Revision as of 05:10, 21 December 2021 by XymphBot (talk | contribs) (→‎Speedrunning: Automated edit - Verify no DSDA map records; rm empty Misc section)
(diff) ← Older revision | Latest revision (diff) | Newer revision → (diff)
A checked version of this page, approved on 21 December 2021, was based on this revision.
This level occupies the map slot MAP24. For other maps which occupy this slot, see Category:MAP24.

MAP24: Deaf Kamikaze is the twenty-fourth map of 2048 Unleashed. It was designed by AnonimVio and uses the music track "Under a Crimson Moon" by Eric Baker, originally used in Plutonia 2. 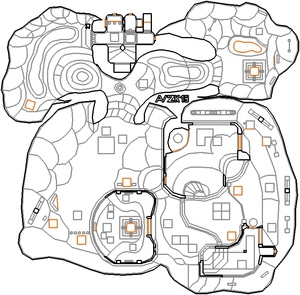 Map of Deaf Kamikaze
Letters in italics refer to marked spots on the map. Sector, thing, and linedef numbers in boldface are secrets which count toward the end-of-level tally.

Step on the teleporter in front of you to arrive on a path with a demon - do not shoot it yet as you will alert a cyberdemon on your left and risk being hit by its rockets. Step round the demon and follow the path to a door, open it and kill the monsters waiting behind it (including a revenant on your left), then step through and turn left to collect a megaarmor. Run up the nearby steps to the cyberdemon's ledge then quickly step round it to find the yellow keycard. Backtrack to where you teleported in and go through the door here to confront an arch-vile and two revenants that have teleported in, then head west and open another door (requiring the yellow key) and kill some imps, chaingunners and a demon that rise from the floor before pressing the gargoyle switch by the fenced window. This will cause a second cyberdemon to appear just outside the window.

Go back to the door leading to the cyberdemon's platform to find that a wooden pillar has lowered to reveal a teleporter - step into it to enter an area with two revenants, take the backpack here then head west into a tunnel which you should follow until you can turn left to confront a mancubus. Go past the mancubus and follow the blood river until you see the blue skull key and a rocket launcher sitting on a bloody step on your right. After taking the key, use the rocket launcher to hold back some revenants and Hell knights that teleport in until a set of bars next to the blue key lower, allowing you to teleport back to the south-east corner of the level where some demons and chaingunners have appeared. Go through the door to the cyberdemon's platform again; next to the steps is a lion switch that requires the blue key and will lower a set of bars elsewhere in the level.

Go through the door again, step into the teleporter you used earlier then head west into the tunnel that led to the blue key - this time, keep heading west past an arachnotron until you find some health bonuses around an impaled corpse then turn right to go through a doorway (which opened when you pressed the lion switch earlier). Once you enter the building, climb the steps on your right then step over a gray platform to a chain switch - pull it, kill the knight that is revealed behind you then go down the steps and pull a second chain switch that was hidden behind some bars. This will lower the gray platform you stepped over earlier, but also cause an arch-vile to appear behind you - kill it then step past the gray platform to a third chain switch which will reveal a chaingunner on your left when pulled and lower a pillar holding the red skull key. Go back outside and follow the blood pool round to find the key.

With the red key, kill the arch-vile that appears behind you as well as revenants, barons of Hell, cacodemons and pain elemental that teleport in from the tunnel then head east back to the area where you first teleported in and climb the steps to a satyr switch that requires the red key. Press it then go back to where you found the blue key, kill or avoid the third cyberdemon that has appeared here and step into the teleporter here to return to the south-east corner. Kill the arch-vile that has appeared here then follow the path north to find that a second teleporter has lowered - step on it, then head forward to another teleporter with a berserk pack on it to finish the level.

Press the switch next to the yellow key door, then head east to find that a pillar holding a super shotgun has lowered.