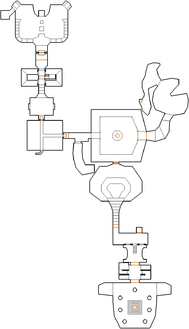 From the starting area, walk eastward, dropping into the shaft ahead of you. Continue forward (the blood below you is harmful) out into the large round courtyard. Walk around the blood "fountain" and lower the gray wall, actually an elevator, proceeding into the cave behind it. Continue to the end of the cave and go through the teleporter.

In the next area, pick up the blue skull key in front of you and snipe at the enemies below to clear your path. When you are done, drop into the blood and climb the stairs from the top platform. From here, you can run along the platforms to the north to get a megasphere if you wish. Either way, go through the door to the south, down the stairs, and into the teleporter.

Back in the starting area, drop down the shaft ahead of you once again. Lower the gray wall in the courtyard again, but ride it back up this time. Continue along the ledge to the blue door in the south. Kill all the enemies in the next room, then continue down the stairs to the lift. Ride it up and proceed along the path to the next lift. Once inside the green marble area, get the items in the watery alcoves to the left and right if you wish, then lower the wall ahead (another lift). You will now find yourself in a dark outdoor area with seven columns surrounding a square structure. Find the switch on one of these columns to lower the wall of the square structure. Step into the teleporter beneath the floating cube of water inside to exit the level.