Revision as of 01:22, 5 August 2022 by XymphBot (talk | contribs) (→‎Speedrunning: Automated edit - Update DSDA map records)
(diff) ← Older revision | Latest revision (diff) | Newer revision → (diff)
A checked version of this page, approved on 5 August 2022, was based on this revision.
This level occupies the map slot MAP26. For other maps which occupy this slot, see Category:MAP26.

MAP26: Dis 2000 is the twenty-sixth map of Hell Revealed II. It was designed by Pedro Arturo Gomez Blanco (PAGB666) and uses the music track "Nightmares of the Slaves," by Petter Mårtensen (Thyrbse). 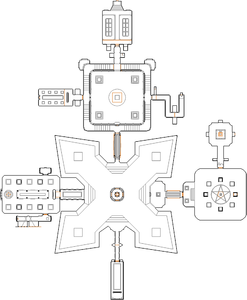 Map of Dis 2000
Letters in italics refer to marked spots on the map. Sector, thing, and linedef numbers in boldface are secrets which count toward the end-of-level tally.

Grab the shotgun and prepare to fight a flock of imps. After that, open the door, looking out for the ambush at the midway point. You will find yourself at the main area which looks very familiar. This will function as a hub, but the majority of the area is covered with damaging lava, so you might want to stay on the marble ledges. Several chaingunners (shotgun guys on Hey, Not Too Rough or lower) will be on the other ledges as you enter this area, so kill them before proceeding. You need to reach the northern part of the hub, pressing the gargoyle switch going to the next hall. Open the next door and kill the barons of Hell and mancubi along the way. In the middle of the open cloister is a spider mastermind guarding the red skull key. Kill it and take the key, watching out for cacodemons who appear on the marble pillars in the corners of the cloister.

After getting the key, return to the hub and head for the east side, which is now open and filled with revenants. Also watch out for mancubi wandering in the lava. Kill the barons of Hell guarding the red door and head into the next chamber. There are a lot of mancubi here, and in the middle of the pentagram is the yellow skull key. Grabbing it triggers some monsters behind columns (a cyberdemon and three arch-viles on Ultra Violence or higher, for example), so be prepared when you pick up the key. The eastern column holds a switch that when flipped, opens up the western section of the hub.

There will probably be more mancubi in the hub, so dispose of them and get to the western side and kill the arachnotrons in front of the lift. Take it up and kill the mancubi in the blue key chamber. To get the key, go to the southern door, and press the skull switch in the hallway that follows. You will trigger an arch-vile, spectres, and chaingunners, but also lower the blue key pedestal. Return to the hub one final time and you will have to face off against four spiderdemons. After killing them, open any of the blue doors in the middle and press any of the switches to lower the exit.

Inside the cloister with the red key, the outer walkways have three paths you could take leading to supplies. The left walkway has a door that does not hold anything fancy, but it does open up the right side. Kill the chaingunners and barons of Hell inside, then press the switch, prepared to fight against several revenants and more barons. Return to the cloister halls and head to the right side for a hallway with a plasma gun and several ambushes, including spectres and arch-viles. There is a teleporter leading out. To access the northern area, head into the cloister itself and press the lion switch to lower the block. Head through the next door (despite it having red skull markings around it, you actually do not need the red key to open the door). Kill the Hell knights, imps, and barons of Hell inside the room. Press the switch so you can leave the room, and you will also have to contend with mancubi on the walls. As you head out, there will be a teleporter to your left, taking you back to the entrance of the cloister.

North of the yellow key chamber, open up the yellow door and kill the demons. You will see the BFG9000 in the middle of a room. Grabbing the gun triggers a trap in which chaingunners on the walls around you and barons to show up behind you. Shoot the eastern gargoyle switch to raise a step so you can hop over the bars blocking you from leaving the trap.

After flipping the switch that lowers the blue skull key, leave the room and go straight north to a supply depot with medikits, a megaarmor, and ammo.

* The vertex count without the effect of node building is 2826.