MAP26: Excoriation is the twenty-sixth map of Requiem. It was designed by Adam Windsor, and uses the music track "The Rhythm of Carnage" by David Shaw. It is the smallest and shortest level in the megawad.

A nightmare of frantic combat. You remember violent flashes of naked fear ... the red-hot barrels of your shotgun burning your hands ... you remember laughing in the carnage. 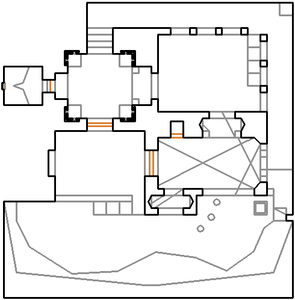 Map of Excoriation
Letters in italics refer to marked spots on the map. Sector numbers in boldface are secrets which count toward the end-of-level tally.

In this very small map, you just need to get the red skull key sitting in the northeast corner of the map, and then open the red door to the west to reach the exit. There are plenty of monsters present though.

* The vertex count without the effect of node building is 342.

This level was originally meant to be MAP27 of the sixth part of Demonfear, Demonfear 6: The Heart, which was intended to come out in 1996 but was never released. Windsor would eventually create an entirely different "Demonfear 6" in 1999, and he compiled the whole series into one megawad a year later.

This level was intended to be MAP25: Chaos Zone. However, the levels were switched around during compilation and the level titles were not swapped with them.[1]