MAP27: Ghost Town is the twenty-seventh level of PlayStation Final Doom, and the third level of the Plutonia episode. It is based on the PC version of MAP05: Ghost Town from The Plutonia Experiment, with modifications to accommodate the PlayStation's framerate and memory limitations and add enhancements such as colored lighting. It uses the music track "Lurkers". 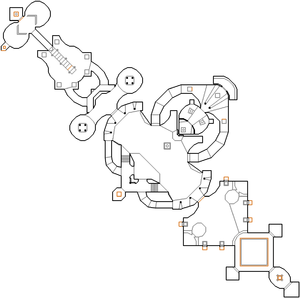 You start in a small room with a walkway in front of you with a shotgun on it. On both sides of the walkway are windows with chaingunners in them. Kill them if you want, then proceed forward and take the megaarmor. In this room are two columns blocking access to the stairs behind them. Hit the switch on either column, and they will both lower to reveal Hell knights. Kill them then proceed down either hallway, wary of the knight at the end. You will be overlooking a large courtyard with one to three cacodemons (depending on skill level) and an arachnotron. There are also a pair of lifted platforms at each end with chaingunners. Clean out the room in whichever way suits you, then climb up the stairs in the south-west corner and go down the south hallway, leading to the south-eastern area of the level.

Take a few steps into the next area, and you will be greeted by chaingunners on the surrounding pillar and one or three arachnotrons, as well as a pair of arachnotrons on raised platforms. Use the doorway and raised platforms as cover to kill the enemies, then move forward and collect the rockets on the square platform, then take the blue keycard in the next room. This will release a number of knights from alcoves around you, as well as releasing more chaingunners outside, so run back to the central area.

Climb up the staircases in the south-west corner again, and this time go through the north hallway. Pass through the wide doorway to a grassy area with water pools on either side, that each have a wooden structure with a chaingunner. Go inside the brick building ahead to enter a room with skin walls. Kill the chaingunners at the top of the stairs and then climb up them; as you climb the stairs, the columns around you will lower to release various enemies including two knights. Kill them if you choose, then head north-west to a room with marble walls on either side. Try to open the door ahead and the marble walls will open to reveal one or two knights waiting in ambush, and another knight blocking a switch to the south-west. Deal with these enemies, hit the south-west switch to open the door, then step it to find the exit teleporter.

A super shotgun is placed behind the teleporter at the top of the staircases in the central area.

In the north-western area, a rocket launcher is hidden in the north-eastern water pool behind the wooden structure. Armor is placed just inside the entrance to the nearby brick building.

Some monsters in the level feature Deathmatch-only flag and thus will not appear in this mode since there is no way to enable enemies: