Revision as of 01:46, 24 March 2022 by Dynamo128 (talk | contribs) (Frankly these screenshots are kind of pointless to begin with, but at least with this edit the map preview will show on the thumbnail instead, as it should.)
(diff) ← Older revision | Latest revision (diff) | Newer revision → (diff)
A checked version of this page, approved on 24 March 2022, was based on this revision.
This level occupies the map slot MAP27. For other maps which occupy this slot, see Category:MAP27.

No Brakes is a map for Doom II created by Thomas "Lutrov71" Lutrov and Cyber-Menace that requires a limit-removing source port. It was released as a stand-alone PWAD in February 2005. The unmodified map was later included in the Newdoom Community Project (NDCP).

The name 'No Brakes' was derived from a song by The Offspring. The mapping style is influenced by Plutonia, Alien Vendetta, and Erik Alm. No Brakes has a good level of detail and lighting and is full of monsters.

The map was originally designed for the Doomworld Community Chest 2 community megawad, however it was withdrawn. After being entered and then withdrawn in a spate from other similar projects, it was accepted by NDCP. 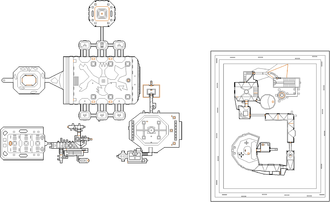 Map of No Brakes
Letters in italics refer to marked spots on the map. Sector, thing, and linedef numbers in boldface are secrets which count toward the end-of-level tally. 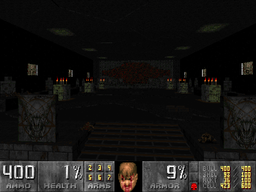 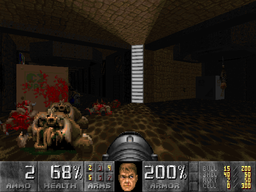 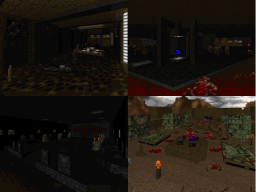 Screenshots of No Brakes

You will have to be wary of traps around every turn, as the map has plenty of them. Also be wary of areas with cages in this map, as it can be difficult to see monsters beyond them, especially after pressing switches.

Right from the start you will have to deal with enemies, including a lost soul immediately to your left. Go through the sewage tunnel until you find a lift leading north. Take the lift up and at the end of the passage hit the switch. Backtrack to the start to find that the door behind the vines is open. Go forward a bit to trigger a trap. Go through the stairs into the next big room. There are chaingunners behind the cage, as well as a switch you need to press. Press the switch, watching out for the arch-vile that appears behind the cages, then go through the new door. The invulnerability just before the next teleporter should help you out when you teleport into a large monster-filled room. A similar setup to the previous area exists here, where there are monsters behind a cage and a switch to press. Press it to open a number of areas. Most are monster closets, but go through the vines to the east to continue with the map. There is a cage of arch-viles in the middle, and another cage to the right with chaingunners and revenants. The lone switch here reveals two revenants and opens the north door.

Take note of the three teleporters that are on the right hand side of the room before you head through the north door. Go up the stairs and past the barrier to the next switch, revealing a baron of Hell, a BFG9000, and another switch. This one opens walls around you revealing mancubi and an arch-vile. The north door lowers as you approach it, and you will appear back at the big room again. The central teleporter to the east is open now, so take that into a new area. In this large area with blood pools, find the lift to the east and take it up. In this room is a teleporter. Go through here into the central cage. Quickly press the switch and leave the cage going back into the room. Two columns with Hell knights inside are going to lower, as is a tunnel to the southeast with various monsters. Go through this tunnel. The next switch you press lowers lots of walls, revealing the outer sections of this area. As you progress further, be sure to watch you front and back as there will be monsters coming at you from different sides. When you get past the cage with shotgun guys, go through and climb the stairs, as any attempt out of the blood will warp you back. Keep going until you reach the red skull key. Watch out for the trap, and then backtrack a bit to the room with the large bloodfall structure. The red door is to the southeast. Take it and enter the teleporter back to the large room with cages.

Now find the red switch near the teleporter with red bars and enter this teleporter. In this hall, go through, and then through the bloodfall into a very large chamber with a cyberdemon on the far end. There are several lifts here leading to the halls north and south. Take either of the northern lifts, and go to the room with the skull on the floor. Go north from here into the room with the blue key. You will be locked in when you enter the room. Grabbing the key releases several monsters; the arch-vile's closet has a switch which allows you to escape. Be careful heading back into the large chamber as a lot of monsters will now be in it. When you have finished your business here, take the teleporter to the east to leave back to the large room with cages.

Finally, hit the blue key switch and take the teleporter to be whisked back to the start. There is a new passage open where an imp will attack you from. In the next big area is the yellow key, and you will be ambushed by a ton of monsters when you grab it. When you are ready to leave, go through the sewage tunnel to the yellow door and exit.

Two arch-viles (things 257 and 296) are inside columns in the big room with the bars and teleporters, however, there is nothing that will open up these two columns. This means that these two arch-viles can only be killed via cheating.

* The vertex count without the effect of node building is 4528.