Revision as of 03:11, 27 November 2021 by XymphBot (talk | contribs) (Automated edit - rm Speedrunning section)
(diff) ← Older revision | Latest revision (diff) | Newer revision → (diff)
A checked version of this page, approved on 27 November 2021, was based on this revision.
This level occupies the map slot MAP27. For other maps which occupy this slot, see Category:MAP27.

MAP27: The Lab is a level in Strife. It uses the music track "Tech". The Loremaster is encountered as a boss and must be defeated to obtain his piece of the Sigil. 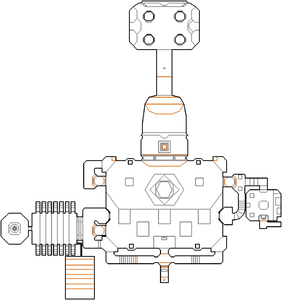 Map of The Lab
Letters in italics refer to marked spots on the map. Sector, thing, and linedef numbers in boldface are secrets.

Open the door and go through to be "welcomed" by the Loremaster's voice. There will be a templar in front of you on Veteran skill level, or two on Elite or Bloodbath; destroy them and approach the switch they are guarding, but do not pull it yet - two inquisitors will have been alerted to your presence and should be destroyed before you face the Loremaster. If the inquisitors are on the ground below the ledge you are standing on, they may get stuck trying to jetpack up to you; if this happens you can shoot at them as they jump.

Once the inquisitors are destroyed and you are ready to fight, pull the switch and the Loremaster will be revealed on a high platform in front of you. The Loremaster is a flying enemy who attacks using a grappling hook - the hook itself deals minor damage, but if you are pulled off a high ledge then you will suffer a lot of falling damage. Because the Loremaster is a small enemy, it is advisable to use hitscan weapons like the assault rifle or mauler depending on your range.

Once the Loremaster is destroyed a spectre will emerge from his corpse - it is the strongest of all the spectres and its Sigil shots will fire lightning bolts ahead and to the sides, so using cover is strongly recommended. Once the spectre is destroyed, you will obtain the fourth or fifth piece of the Sigil depending on whether you are following the Oracle's directions. If you are following the Oracle, you will need to return to his temple by backtracking through the proving grounds then come back here once you have the complete Sigil, otherwise you can now proceed to the endgame.

From the level entrance, approach the switch that released the Loremaster and jump east across the platforms to an opening in the wall. Turn left and go down the steps, then step on the hazard markings to raise a lift which will take you to the bottom floor. Turn right and head for the large gate to find a square tile with a Sigil symbol on it - pressing use on this tile while carrying the complete Sigil will open the wall ahead. Go through and step on the green lift ahead to be taken down to a passage leading to the alien ship.

From the level entrance, turn left and head down two sets of steps to find a large metal doorway with a button. Press the button to reveal a chamber full of "becoming" acolytes, humans who are midway through being processed into Order soldiers. Head through this room and open the door at the west end to find a room with four medical kits. (Once the chamber is opened, making any noise will cause the alcoves to seal and a large number of acolytes will teleport in, representing the "becoming" acolytes being fully processed. Fire some phosphorous grenades into the chamber to incinerate the acolytes as they appear.)

On reaching the bottom floor, head west around the Loremaster's platform to find another lift leading up to a ledge with several pickups. There is also a teleporter which leads to another ledge across the room, holding an energy pack and two med patches.

The bars blocking the doorway to the alien ship use tag 666, and are coded to lower when spectre "E" has been destroyed.

The alcoves holding the "becoming" acolytes use tag 999, and will shut like blazing doors when they are alerted or injured.