Revision as of 10:26, 5 July 2019 by XymphBot (talk | contribs) (Automated edit - Add par time from MAPINFO)
(diff) ← Older revision | Latest revision (diff) | Newer revision → (diff)
A checked version of this page, approved on 5 July 2019, was based on this revision.
This level occupies the map slot MAP28. For other maps which occupy this slot, see Category:MAP28.

MAP28: Arachnozone is the twenty-eighth map of The Twilight Zone. It was designed by Paul Corfiatis and uses the music track from E1M8/E4M8 of Heretic, composed by Kevin Schilder. The par time defined in MAPINFO is 2:03. 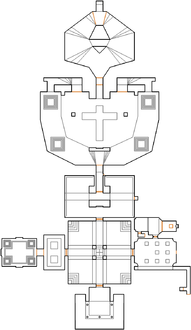 Map of Arachnozone
Letters in italics refer to marked spots on the map. Sector numbers in boldface are secrets which count toward the end-of-level tally.