MAP28: Baphomet's Keep is the twenty-eighth map of Jenesis. It was designed by James Paddock (Jimmy) and uses the music track "The Greater Good," composed by Stuart Rynn (stewboy). The par time is 3:50. 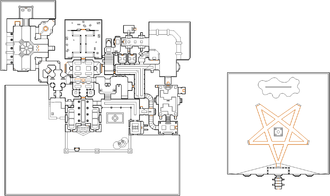 Map of Baphomet's Keep
Letters in italics refer to marked spots on the map. Sector numbers in boldface are secrets which count toward the end-of-level tally.

To finish the level, teleport to the area with the pentagram. Once there, hit all 4 switches in the pentagram and RUN to where you came from. Jump down, pull the switch there and run right back up. Pump the blob on the central platform full of lead! It is recommended that you kill all the monsters in your way before doing this (start with any archviles in the room).

* The vertex count without the effect of node building is 4338.