Revision as of 13:12, 3 April 2022 by XymphBot (talk | contribs) (→‎Speedrunning: Automated edit - Update DSDA map records)
(diff) ← Older revision | Latest revision (diff) | Newer revision → (diff)
A checked version of this page, approved on 3 April 2022, was based on this revision.
This level occupies the map slot MAP29. For other maps which occupy this slot, see Category:MAP29.

MAP29: Hell's Cauldron is the twenty-ninth map of Hell Revealed II. It was designed by Jonas Feragen and uses the music track "When the Sun Won't Rise Anymore," by Petter Mårtensen (Thyrbse). 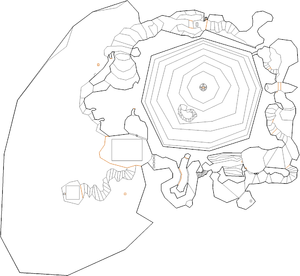 Map of Hell's Cauldron
Letters in italics refer to marked spots on the map. Sector, thing, and linedef numbers in boldface are secrets which count toward the end-of-level tally.

For this map, you should keep your supplies handy and your health and ammo up, as it is one giant linear path all the way to the end. You will be fighting lots of monsters along the way, so make sure you are able to handle them. The exit is in the center of a large pit at the center of the map, guarded by a spider mastermind, arachnotrons, mancubi, imps, and Hell knights.

This is the only map in Hell Revealed 2 that does not contain any deathmatch starts.