Revision as of 05:11, 21 December 2021 by XymphBot (talk | contribs) (→‎Speedrunning: Automated edit - Verify no DSDA map records; rm empty Misc section)
(diff) ← Older revision | Latest revision (diff) | Newer revision → (diff)
A checked version of this page, approved on 21 December 2021, was based on this revision.
This level occupies the map slot MAP29. For other maps which occupy this slot, see Category:MAP29.

MAP29: Sapphire Pools is the twenty-ninth map of 2048 Unleashed. It was designed by AnonimVio and uses the music track "Midnight Call" by Mark Klem, taken from Memento Mori II. 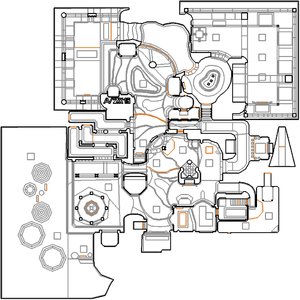 Map of Sapphire Pools
Letters in italics refer to marked spots on the map. Sector, thing, and linedef numbers in boldface are secrets which count toward the end-of-level tally.

Take the shotgun sitting in front of you under some shotgun guys then turn left to kill some approaching imps. Head south down the steps to a water pool (watch out for an approaching pain elemental) then turn left and head forward into a narrow passage with shotgun shells. Look round the corner to kill a revenant then go through the door next to it and climb the steps to another door guarded by a shotgun guy and two zombiemen. Go through the second door to find an imp next to some armor, then step out of the window onto a thin blue ledge and carefully follow this west and south, round a corner decorated with blue strip lights, until you can step into a chamber containing the blue keycard. The nearby wall will lower and an arch-vile will appear behind it, so be ready to kill it after taking the keycard.

Drop down to the ground and head east towards the narrow passage you used earlier - you will pass a lion switch that can be activated using the blue keycard, but ignore it for now. Kill an arachnotron blocking your way then head north-east into a dark tunnel which you can follow past a chaingunner and mancubus to a set of steps. Go down the steps to a cave, but be ready to kill a large number of imps and a mancubus that appear in a neighboring cavern on your left - once they are dead, go through the cavern and climb the steps to an outdoor area with two arachnotrons. There are two stone steps concealing enemies that you need to walk over to reach a skull switch - the first step conceals three chaingunners while the second step conceals two Hell knights. Make sure to collect the rocket launcher and backpack on your way to the skull switch.

After pressing the switch, leave the area quickly to avoid a chaingunner ambush then make your way back to the south side of the level, watching out for zombies and revenants that have teleported in, then head west to a fountain with the blue skull key at the top - the fountain is guarded by an arch-vile and two arachnotrons behind a fence, as well as a mancubus and some spectres. Climb the fountain and take the skull key, but be ready for an ambush by various flying monsters along with revenants and knights. Head east to the lion switch you ignored earlier - press it now, then head north-east into the tunnel you used earlier to find that a set of bars blocking a second lion switch have opened. When you approach the switch a cyberdemon will appear right in front of you, so quickly exit the tunnel and fight it from an open area. After the cyberdemon is killed, press the switch and quickly turn round to kill two arch-viles that are revealed behind you along with a plasma gun.

Follow the tunnel north and go down the steps into the cave again then head north-east through a newly-revealed opening to get outside - immediately turn left to kill a chaingunner lying in ambush, then look right to deal with some revenants, mancubi, arachnotrons and a baron of Hell which are protecting a lion switch. Make sure you take the rocket launcher, plasma gun and megasphere in this area before pressing the switch, as pressing it will close the way back and open a wall to your right and reveal fourteen revenants, in addition to knights, cacodemons, imps, chaingunners and a cyberdemon that teleport in. Once everything is dead and you are able to leave, go back through the tunnel and turn right once you emerge to see that a teleporter next to an exit sign has lowered. Kill the arch-vile waiting nearby, then step on the teleporter; the level will automatically end after a few seconds.

Near the fountain with the blue skull key is an alcove containing a mancubus and an unreachable BFG9000. This is probably deliberate, as shooting all the bookcases to open secret #3 will cause the inner walls of this alcove to lower, revealing the message "SORRY! THIS IS NOT A SECRET AREA! TRY AGAIN!"

The start of the level bears some resemblance to Plutonia 2's MAP03: Skull Island.