MAP30: Abandoned Front Base is a level in Strife which replaces MAP03: Front Base after the Programmer is killed, as the Front has moved its base of operations to the Order's former castle. It uses the music track "Drone".

There are some medical supplies and ammunition left behind during the move, which the player can scavenge if they want to be thorough. Geoff will also be guarding the entrance in the town indefinitely in spite of the base having moved. While it seems that the abandoned base exists more for atmosphere than for any major contribution to the game, the level does hide a valuable stash. 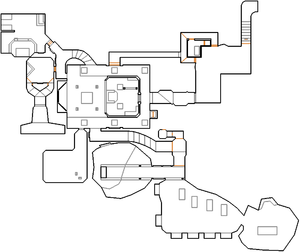 Map of Abandoned Front Base
Letters in italics refer to marked spots on the map. Sector, thing, and linedef numbers in boldface are secrets.

While this level is entirely optional and there are no "essentials" to speak of, the Front left a number of useful items during their move. In addition to the hidden areas described below, a med patch and medical kit can be found on a table in the medical bay. If you go down to the barracks and investigate the eastern chamber, you will find a teleporter beacon stashed in a corner.

You can enter the two first secret areas in MAP03 as well as you are still able to return there when you get the silver key. However, area #1 is empty and area #2 only has two medical kits.

The player 1 start (Thing 0) and teleport map spot 1 (Thing 1) have no skill flags set either, but because of special handling in the engine, they function normally in the level.