Difference between revisions of "MAP30: The Lair (Doom 64)"

MAP30: The Lair is the second secret level of Doom 64, designed by Danny Lewis. It uses the music track "Lamentation Of The Forgotten". It is accessible from Level 12, Altar Of Pain and shares background music with it. This level consists of a medium-sized structure with an upper, open area and a winding basement that houses monsters of varying degrees of strength and, for all intents and purposes, this is where the player will first come across arachnotrons (if the player didn't already go through Level 32, Hectic). The objective of the level is to obtain the Demon Key. 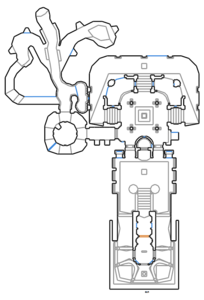 As in MAP29: Outpost Omega, the main objective in the level is to find the Demon Key, which is located in the center of the building atop a high pillar. In order for the player to get it, he must first head to a closed-off section of the upper deck to the right of the pillar (when facing it from the other end of the room), thereby activating a tripwire that lowers a portion of the far wall, exposing a shootable switch. After shooting it, the player must run to the adjacent section on the other side of the upper area where another shootable switch is located. Shooting that will lower the pillar, giving the player access to the Demon Key. After this is accomplished, the player must then continue through the building into the basement, battle hordes of demons, and find the yellow key. This gives the player access to a switch which will bring about the exit, which is back in the starting room.

By using lag clipping on the southern-most wall of the map after being raised onto the ledge by the blue key pillar, it is possible to access and activate a push-action linedef with action 124, Exit Level, which is meant for use by macro 17 to transfer this special to the level's actual exit switch. Because action 124 exits to the level indicated by the linedef's tag, and the line is tagged 70 for identification within the macro, it will cause the player to attempt to exit to MAP70 when activated directly. The game detects this in the finale code as a victory condition, since the destination map number is greater than 32, and triggers the ending of the game in the same manner as if MAP28: The Absolution had been defeated. Under the usual rules of communities such as the Speed Demos Archive and tasvideos.org, this is considered a legitimate manner of beating the game for "Any %" completion. Discovery of this trick has lowered the world record for the game's completion to under sixteen minutes.