MAP30: The Verge of Revelation (Whispers of Satan)

MAP30: The Verge of Revelation is the thirtieth and final map of Whispers of Satan. It was designed by Paul Corfiatis and Kristian Aro, and uses the music track "Fear of Death" by Paul Corfiatis. 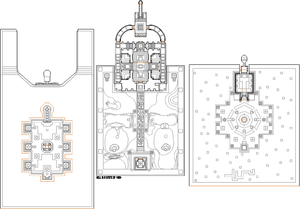 Map of The Verge of Revelation
Letters in italics refer to marked spots on the map. Sector, thing, and linedef numbers in boldface are secrets which count toward the end-of-level tally.

Head straight down the path to the backpack and open the door to get inside. Inside, get the super shotgun, and then slowly approach the large skull switch and barons of Hell will teleport onto the pentagram with the rocket launcher. Kill them and flip the switch to reveal side compartments with two spider masterminds and two switches. Press both of the switches to lower the walls near the large skull switches. Head through either one and take the northern door to a hall that curves towards the north central room. Inside this room are several switches and an arch-vile. You need to press the switch in the middle. This switch opens up the two doors leading outside of the big building. Take both side hallways and go all the way south to get both the red and yellow keys by hitting the switches to lower their respective pillars. Return to the north central room after picking up both keys, and then press the other two switches. Then go north to the teleporter at the far end. You will appear on a lift rising up. At the top, descend and kill the spectres, then go around the fiery column to the door. Open it to confront two arch-viles, one of which teleports behind the fiery column. Approach the faceted wall and it will lower revealing a lift. Take it down to the next teleporter then enter.

You will land on top of a megasphere. Press the switch in front of you to rise up. When you move out, a cyberdemon appears in the area so kill him. Take care not to fall off of the platform or you will die. You will notice that there are six sets of steps leading up to six switches each. These are barred for now. Look to the south and spot the invulnerability and the switch. Pressing this switch not only lowers the bars to the six switches, it also reveals the Icon of Sin, and it will start spewing monsters onto the circular spots with dead corpses on them. What you need to do to beat the boss is to press all six switches as fast as possible, that way, you will lower the bars and raise some steps leading onto a platform where you can easily fire into the boss brain with your rocket launcher. Again, take care not to fall off while doing so. Fire at the boss brain until it dies, then the level will end.

If you explore the area surrounding the big building in front of the start, you can get a megaarmor, a soul sphere, and several weapons and ammo.

The caged areas with imps in them inside the big building have several supplies including a megaarmor, a berserk pack, a BFG9000, and a plasma gun.

Near the start of the map, there's some text that reads "HELL IS A STATE OF MIND."