MAP31: Pharaoh is the first secret map of TNT: Evilution and can be accessed via MAP15. It was designed by Dario Casali. 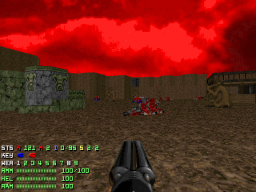 Got the red key

*Notice: the yellow card was omitted in the initial releases of the WAD for single player only. See Yellow keycard bug section. 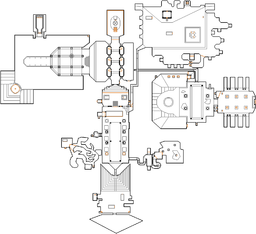 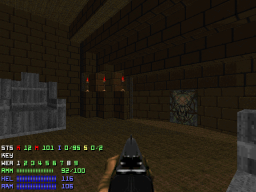 Strafe jump from the stairs on your left

In early released versions of Evilution, this map has a critical flaw: there is no yellow key in single-player, as the key was accidentally flagged as multiplayer-only. TeamTNT quickly released a patch for the WAD that fixes this issue. This can be found on their website. From http://doomgate.de is also a patching utility DOOM Patcher available, which resolves the problem by modifying the game IWAD. Skilled players also found a couple of interesting albeit challenging ways to complete the level without the yellow key, involving hitting the switch on the right throne from its edge above, or wedging the player through the key-color bars in the same room to hit the switches therein.

Secret Exit: At the end of the level you will arrive at a large lake with a dock-like structure stretching out into it, with the exit visible off in the southwest corner. There is also a shed-like building at the north end of the lake; go into this instead. Once inside, open the back wall to reveal the switch to exit to the secret level, MAP32: Caribbean.