Revision as of 09:52, 1 June 2022 by XymphBot (talk | contribs) (→‎Speedrunning: Automated edit - Update DSDA map records)
(diff) ← Older revision | Latest revision (diff) | Newer revision → (diff)
A checked version of this page, approved on 1 June 2022, was based on this revision.
This level occupies the map slot MAP31. For other maps which occupy this slot, see Category:MAP31.

MAP31: The Descent, designed by Yonatan Donner, is the first secret level of Hell Revealed. It uses a remix of the classical music piece "Adagio in G minor" composed for Rise of the Triad.

In this lift you will not be sure if you are descending into hell, or are in hell already. Enemies will fight you all the way down, and there more resistance awaits. You must get the ammunition in the start or you will never survive the descent. And you must be very good to get out alive. Your heartbeat might go very high when you expect the way out to show any moment... You can leave from the normal exit, which requires two keys, or the secret exit, which doesn't require any key. But to leave through it you will need to prove good maneuverability skills. 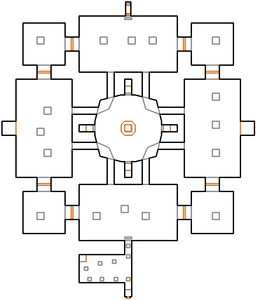 When the level starts, you will see a pillar in the middle of the room. Shoot it. This will open 4 doors at the sides of the room, all containing guns. Next, activate the switch on the same pillar you shot before. The floor will start to descend and monsters will spawn, starting with zombies, ending with arch-viles and barons of Hell. You do not necessarily have to fight the monsters on the descending lift: in the lift, there's only a single teleport destination which you can occupy, and this will prevent monsters from teleporting into the lift. In source ports with z-clipping, you can also stay on the pillar platform or quickly run into one of the weapon/ammo stashes after hitting the switch.

After the lift has stopped moving and you are at the bottom, you will be confronted by chaingunners in the halls, and the halls lead to rooms with spectres in them. The secret exit is to the south and the normal exit is to the north. The keys are located in the west and east rooms. On Ultra-Violence and Nightmare every corner room will house a cyberdemon, making it hard to get to the soul spheres situated in the corners of the map. Picking up the red keycard reveals revenants and barons of Hell around the map, while picking up the blue keycard makes an arch-vile teleport to the center, most likely resurrecting some of the enemies you had killed before. Be aware of your health, the level only includes few health pickups.

Note that the keys are only required if you are headed for the normal exit. If you are going for the secret exit, you can reach it right away once you descend all the way down. The southern part of the map holds the secret exit. It is intended for the player to carefully navigate on top of small pillars to reach it; however, it's possible to just strafe50 straight to the exit switch.

The lift with spawning enemies may be inspired by Quake E2M6.