MAP31: Training Facility is a level in Strife, accessible from MAP07: Castle. It uses the music track "Fight". It is a strictly optional level where the third False Programmer can be located, alongside a challenging obstacle course. The player is rewarded handsomely for completing this level, however, with both a large cache of items, weapons, and ammo available, as well as a stamina and accuracy upgrade.

This is one of the few Strife maps that can only be accessed for a limited time; after the Programmer is killed, this map becomes blocked off by a collapsed passageway in MAP10: New Front Base. Finishing the training course in Strife: Veteran Edition will give the player the Top of the class achievement. 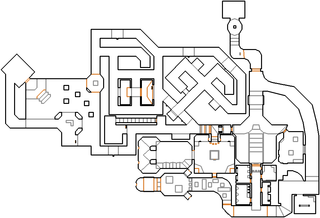 Letters in italics refer to marked spots on the map. Sector numbers in boldface are secrets.

The level has an armory that is accessible even if you decide to ignore the training course itself. After you have opened the door at the beginning, you can see the door of the armory straight ahead. Use the adjacent switches to control the bars behind the door. There is a corridor where four storerooms can be entered. They hold a considerable amount of weapons, ammunition and armors. Alternatively, you can enter the armory from the long passage that leads to the training facility: jump over the railing and drop to the corridor below.

At the beginning, open the door, turn left and follow the passage until you reach a sign saying "guard traning facility" [sic]. Enter the door at the sign and maneuver through all the lifts and crushers. When you are ready, go to the switch in the distance. Turn around to confront two sentinels and hit the switches in their closets. Backtrack to the gray door you saw while passing the crusher course and enter the hall beyond.

When you press the switch in the center, you will reveal a crusader and open doors in the west. Hit another switch at the nearby doorway to raise a staircase in the western room. Go up the stairs and hit two new switches on the top. Two teleporters have now become available in the crusader hall. They lead to the platforms that overlook the zone. Both have a switch, and their combined effect will open the route forward. Enter the passage, and you will suddenly be teleported elsewhere.

You have appeared at a high maze. Go to the north, make two 90-degree turns to the right when you come at intersections and move forward. When you turn left at the second intersection ahead, you will find a lift. Travel up and press the switch in front of you. Since the entrance closes behind you, you need to drop back to the maze via the window. From now on, you need to move with caution, as several death traps have been activated in the area.

Return to the teleporter pad where you appeared. In the south, there is a wall torch in the distance. Go to it and use jumping and running to pass the death trap nearby. Follow the passage until you come to the next intersection. Turn left, enter the doorway and go up the stairs to find a new switch. Press it and backtrack to the teleporter pad again. To the west of it, there is yet one more zone you need to visit. Go up the lift and follow the long passage to a computer room where the penultimate switch of the training course is located. Hit it, return down and go to jump over the same death trap. Continue on the passage until you see a green gate ahead. When you press the switch at it, you will be told that you have completed the training area and will be rewarded with a stamina and accuracy upgrade. Enter the door and turn left to exit the level or turn right to visit the armory.