Revision as of 10:51, 16 October 2022 by Zokum (talk | contribs)
(diff) ← Older revision | Latest revision (diff) | Newer revision → (diff)
A checked version of this page, approved on 16 October 2022, was based on this revision.
This level occupies the map slot MAP31. For other maps which occupy this slot, see Category:MAP31. 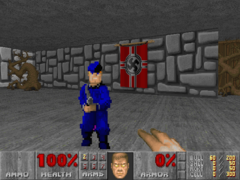 MAP31: Wolfenstein (named MAP31: IDKFA in the BFG Edition) is the first secret map of Doom II and can be accessed via MAP15: Industrial Zone. It was designed by Sandy Petersen and uses the music track "Evil Incarnate". The par time is 2:00. From this map, the player can choose between accessing the second secret map (MAP32: Grosse) or returning to "normal" Doom II gameplay (by exiting to MAP16: Suburbs). 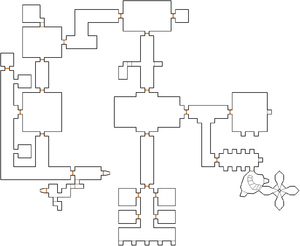 Once in the final room, you can either flip the exit switch in front of you, which takes you to MAP16: Suburbs, or see secrets #2-3 for instructions to the super-secret level, MAP32: Grosse.

For those familiar with Floor 1 of the shareware version of Wolfenstein 3D, each brown-uniformed guard that appears in the "I am Death Incarnate" skill level is replaced with Wolfenstein SS (one on I'm Too Young To Die and Hey Not Too Rough, two on Hurt Me Plenty and four on Ultra-Violence and Nightmare) and the dogs are replaced by demons. In addition, the hallways appear larger and the guards smaller than in Wolfenstein 3D.

These are a pair of hidden areas present in the original Wolfenstein game that do not count towards Doom's secret tally:

Two demons in sector 41 (on Ultra-Violence or Nightmare) occupy the same location, and are immobile until one is killed.

One Wolfenstein SS in the northern-most alcove in sector 51 has the ambush flag set, while his three companions do not.

The map is a replica of the first map of Wolfenstein 3D. There are however some key differences:

In the version included with Doom 3: BFG Edition, all Wolfenstein SS have been replaced with zombiemen. In addition, the map is renamed to MAP31: IDKFA, the music track used is Doom, and the Nazi iconography has been removed from the textures. However, the latter two changes have been made by modifying the resources instead of modifying the map. This has been known to cause multiplayer network game synchronization issues with the original Doom II when playing this level. A patch to un-censor the BFG Edition version is available at this ZDoom forums thread.