Revision as of 05:40, 17 November 2022 by XymphBot (talk | contribs) (→‎Speedrunning: Automated edit - Update DSDA map records)
(diff) ← Older revision | Latest revision (diff) | Newer revision → (diff)
A checked version of this page, approved on 17 November 2022, was based on this revision.
This level occupies the map slot MAP32. For other maps which occupy this slot, see Category:MAP32.

MAP32: Go 4 It is the second secret map of Plutonia 2. It was designed by Charly Goulois (Kira) and Thomas van der Velden, and uses the music track "Nobody Told Me About Plutonia" by James Paddock, a remix of "Nobody Told Me About Id", the music used in E2M8: Tower of Babel from Doom and MAP32: Go 2 It from Plutonia. The par time defined in MAPINFO is 30 seconds.

Much of the level is similar to the original MAP32: Go 2 It level from the Plutonia Experiment though there is a final room with an Icon of Sin. Unlike most Icon encounters, several switches need to be activated to end the level instead of attacking the Icon. It is one of a few Doom II levels which make intentional use of ghost monsters, created by having an arch-vile resurrect a monster who has been crushed. 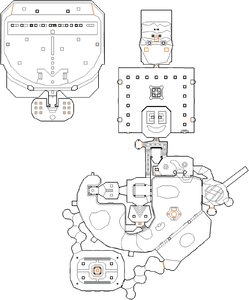 Map of Go 4 It
Letters in italics refer to marked spots on the map. Sector, thing, and linedef numbers in boldface are secrets which count toward the end-of-level tally.

At the start, go up the stairs, at the edge of the room there is a way that looks like MAP01 in Doom II, go through to the end. (forward, right, right) You will see the last area in MAP01 (Doom II) now go left, you will see an open area, in it an area looks like the zigzag way in E1M1 (Doom/Ultimate Doom). Take the yellow skull key (careful, many revenants will appear).

Now go back to the way that looks like MAP01 (Doom II), at the opposite direction of the room that is full of health bonuses (MAP01 (Doom II) room) is the yellow door, open it and click the switch. Now go outside from the last area of MAP01 (Doom II) until you find the small area (east of the map), in it the red skull key (which a wall with the last boss texture is shown there). After you take the red key a big floor will go down front of you, you may go from there or go to the west side of the outside area, go through the stair corridor, you will find a room at the middle of it there is red doors, open these and take the blue skull key.

Now go back to the way that looks like MAP01 (Doom II), at the middle of the way there is the blue door (which this door is at the place of the door that leads you to the four floors up in MAP01 (Doom II)). One of the four floors up is a switch, click it. Now the floors east and west (left and right) will be lowered, go west (or left) to the switch and click it, now go east (or right) and click the switch, now go north to the middle, you will see a corridor, go through it (careful, three cyberdemons will appear instantly) and you must be teleported.

You will now encounter the last area of the map which in front of you there is a big word: PLUTONIA 2 (it has monster spawners). Go down, there are two switches at the east and west, click them both, now go back up and go to the left or right of the half-circle way, until you found the two columns, there are two switches on them, click them both, now head back, there must be three floors lowered (or lowering) down when you stepped over a linedef. Two of them has spider masterminds and the middle one is a switch, click it, now back of you the stairs must be completed, run on it fast without stopping, at the end of it jump to scrolling texture, you must be teleported.

Now you may go left or right to any exit (one of them is a teleport to get you back) or click the switch in front of you when you teleport and see the show of the end.

Leaving/Entering the sector surrounding the spawn pad gives each coop player a shotgun, a super shotgun, a chaingun, a rocket launcher, a plasma gun, a backpack and a megasphere, using a voodoo doll. Since none of these items are tagged as multiplayer only, in games with fewer than four players 100% of items cannot be reached.