Revision as of 04:53, 12 April 2022 by XymphBot (talk | contribs) (→‎Speedrunning: Automated edit - Update DSDA map records)
(diff) ← Older revision | Latest revision (diff) | Newer revision → (diff)
A checked version of this page, approved on 12 April 2022, was based on this revision.
This level occupies the map slot MAP32. For other maps which occupy this slot, see Category:MAP32.

MAP32: Playground is the super secret map of Hell Revealed II. It was designed by Jonas Feragen and uses the music track "Gutknot," by Petter Mårtensen (Thyrbse). 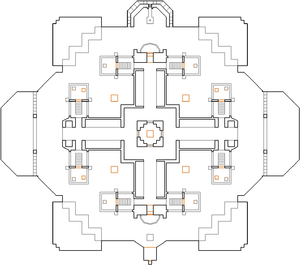 Map of Playground
Letters in italics refer to marked spots on the map. Sector, thing, and linedef numbers in boldface are secrets which count toward the end-of-level tally.

You will face off against monster amounts in the thousands in this open level. As you are fighting, keep watch of your health and ammo; even though there are plenty of pickups, you will more than likely fight to get them. A few weapons are at the start, and the BFG9000 is highly recommended for survival. A cyberdemon guards one right in front of you, so you may need to pry it from him to get it.

Eight platforms in the corners of the map can be reached by stairs. Each one holds a switch, and you need to flip all of the switches to retrieve the blue skull key at the north end of the map. When you reach the platforms, you also need to watch out for new monster closets being opened, as they hold lots of extra monsters. Also, when you reach one platform, the switch on the platform directly opposite of it will lower. If you are fast, you can run from one platform to another to get some much-needed megaspheres. When you get the blue key, head for the north central lift inside the imp/mancubi tunnel. Ride it up for the yellow key, and then go back down. Look out for the arachnotrons that appear. Now go for the south central lift and repeat the same ordeal to get the red skull key, then exit in the center of the map.

* The vertex count without the effect of node building is 1055.