Difference between revisions of "MAP33: Hexsoil (Doom 2 the Way id Did)"

MAP33: Hexsoil is the thirty third map of Doom 2 the Way id Did, and is a secret level parodying MAP33: Betray. It was designed by Blackgaze emulating Michael Bukowski and uses the music track used for the text screens. It can be accessed from MAP02: The Compound as long as the user is using a compatible source port such as ZDoom or the Eternity Engine, while most others can load the level with IDCLEV33 or the -warp parameter, finishing the map may cause the program to crash afterwards.

Unlike other maps in Doom 2 the Way id Did, this map requires a limit-removing source port to successfully run, as the usage of most textures causes the Tutti-frutti effect in Vanilla Doom and Chocolate Doom, and will even bomb out with a Visplane overflow in the large cavern beyond the yellow locked door. Additionally, Chocolate Doom incorrectly titles the map as Level 1: Congo on the automap screen. 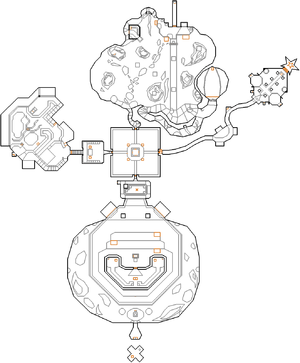