MAP49: Rat Race is the secret map of the All Hope for Terror episode of 2048 Unleashed. It was designed by Paul Corfiatis and uses the music track "The March to War" by Robert Prince, from Wolfenstein 3D. 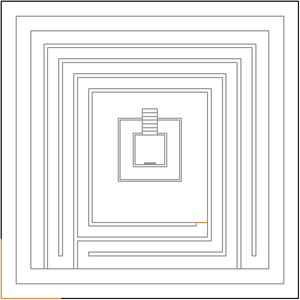 Map of Rat Race
Letters in italics refer to marked spots on the map. Sector, thing, and linedef numbers in boldface are secrets which count toward the end-of-level tally.

This level consists of an arena with a single twisting path, overlooked by a cyberdemon in the center and a very large number of Wolfenstein SS along the outer walls - never stand still in this level or you will die quickly. Run along the path as quickly as possible, making sure to collect any megaspheres, supercharges and armor you find to replenish lost health. As soon as you get to the center the interior walls will lower - turn left to collect a BFG9000, rocket launcher, backpack and ammo and use them to kill the cyberdemon, then climb the steps and flip the switch on the central platform to finish the level.