This level occupies the map slot MAPX08. For other maps with a non-standard slot, see Category:Non-standard map slots.

MAPX08: Deprivation (titled in-game as Old Deprivation) is the eighth map in the Director's Cut episode of Simplicity. It was designed by Melissa McGee (Agent Spork) and uses the music track "Untitled", originally created by Robert Prince for Doom. The par time defined in MAPINFO is 4:10.

This map is an earlier version of MAP18: Deprivation, and was moved to the Director's Cut episode with the release of Ultimate Simplicity. 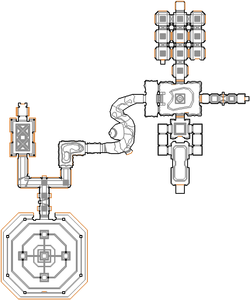 Map of Deprivation
Letters in italics refer to marked spots on the map. Sector, thing, and linedef numbers in boldface are secrets which count toward the end-of-level tally.

Two seconds after the level starts, the floor will rise and carry you up to a room with four mancubi; use the shotgun in front of you as well as a super shotgun at the north end of the room to kill them, then press the satyr switch on the south wall to open the north door which has two cacodemons behind it. Go past the cacodemons to a T-junction with Hell knights waiting on either side, then take the west fork and push past a couple of demons to another door. Open the door and kill some waiting imps and chaingunners, then flip the switch at the north end of the room; after killing two cacodemons that spawn behind you, go back to the T-junction and take the east fork to find that a wall has lowered revealing two barons of Hell. Go past the barons as well as two demons waiting around the next corner to enter a white tunnel, which you can follow past several imps and another baron to reach a rectangular cavern with several demons and spectres.

Press the satyr switch on the east wall to lower it and reveal more demons and imps (some of which are partially invisible), then head straight forward - watching out for a knight that rises from a lava pit - to get the yellow keycard. Go back to the rectangular cavern and you will see the green firestick teleport away to be replaced by a rocket launcher; picking it up is optional and will spawn some cacodemons. Press the satyr switch on the north side of the cavern to lower the yellow-striped bars next to it, then open the door behind them and follow a hallway north past two knights to reach a junction - watch out for the demons and imps that appear in front of and behind you. Take the east fork first and go round the corner to find two cacodemons protecting a satyr switch; press it then run back to the junction and take the west fork this time to find two more cacodemons guarding the red keycard, which you need to grab before it rises out of reach again.

Taking the red key will open a compartment at the junction holding four revenants. Fight your way back to the rectangular cavern and press the satyr switch on the south side to lower some red-striped bars next to it, then open the door behind these bars to confront two barons. Press the satyr switch behind the barons to lower two marble walls to your left and right, then fight your way south past some revenants, knights, demons and imps to get to the exit teleporter.

Most of the areas in this map were reused for the final version MAP18: Deprivation, albeit in a different configuration. Notably, the exit area was moved to be attached to the octagonal room and its door was scripted to require both keys to open; additionally, a cyberdemon served as the final enemy of the later map.