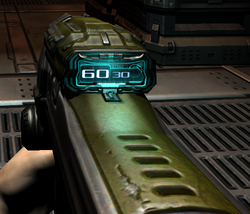 The machine gun
This article is about the weapon in Doom 3. For other versions of this weapon, see:

The machine gun, also known as the MG-88 Enforcer, is a versatile weapon introduced in Doom 3. It has a big magazine size, high rate of fire, and great accuracy. It is useful against most demons up to the cacodemon and especially useful against the lost soul. Its default key is 4. The machine gun uses ammo from machine gun magazines. It has very fast rate of fire, but less power in one bullet than the pistol. It should be used to mow down hordes of lesser demons or zombies. It can also be used for long-range work against enemies who are hiding behind cover. Take note that the ammo counter is on the weapon itself and not on the game HUD - similar to BFG 9000, chaingun and plasma gun. In Doom 3: Resurrection of Evil, it is now the main starting weapon in multiplayer while the pistol acts as the sidearm.

It is first found in Mars City Underground after unlocking the second storage locker from T. Brooks' computer. If this is skipped, it can be found in the first room of Mars City on the upper floor; the stairs are damaged, but you can reach the upper floor by jumping from the railing.

While the pistol, machine gun, and chaingun all fire bullets, they do not use the same caliber and thus do not share the same ammo pool, as in earlier Doom games.

In the game's manual, it is described as such:

"A high rate of fire, good accuracy and excellent power makes this a perfect weapon for medium and long-range enemies and quick targeting."
― Doom 3 instruction manual

The MG-88 appears to be loosely based on the FN P90 personal defense weapon, and features some similarities, but its functionality is quite different in practice. For one, the MG-88 has two barrels which reciprocate individually during firing, possibly as a way to keep the weapon from overheating, or as a way to reduce recoil. Below the two barrels is a targeting sensor, easily mistaken for a third barrel, that connects to the ammo counter mounted on the weapon's upper receiver. This counter is supposed to double as a scope according to some in-game data on it, but this feature is never seen in-game. Additionally, while the weapon has flip-up iron sights, visible on the ammo counter, neither the player nor enemies in-game actually use them. It takes ammunition in 60-round magazines, which feed into the top of the weapon, and it fires caseless rounds that are individually loaded with propellant.

It is unclear why the weapon's sights are never used in-game. It may be because of the targeting system the weapon appears to have, or simply an oversight. What is known is that in reality, the MG-88 without such sighting would be a terribly inaccurate weapon, almost entirely restricted to close combat, with "spraying and praying" being required to get any use out of it.

The MG-88 has a built in alarm that buzzes when the current magazine is reduced to 10 bullets, prompting the user to reload.

Machine guns are good in medium to short range situations against lightly armored foes. Zombies make the best targets being slow and weak. Trites are also best picked off with the machine gun, as well as cherubs and lost souls.

The machine gun is most effective against Z-Secs (aside from the ones with Riot Shields) as it takes down the lightly armored foes quicker than the pistol due to its high rate of fire and is more accurate than the shotgun at medium-to-long range. In a tight spot, machine guns are good versus maggots and imps as well. On lower difficulties, a player with a good aim can easily deal with a demon.

The weapon's rate of fire has two drawbacks. The first is that rapid fire causes the weapon's recoil to disrupt the player's aim. The second is that the weapon burns through its magazine quickly. When using the machine gun, it's recommended that you are near cover in case you need to reload during the middle of a firefight. Generally, the weapon is an ideal firearm to have at the ready whenever the player enters a new area but does not know what is waiting there. 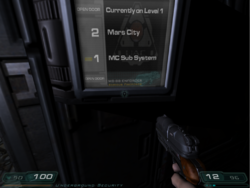 A machine gun was originally going to be used in classic Doom. First-person sprites for it exist in versions 0.3 through 0.5 amongst the alphas. The weapon's appearance, much like the rifle, changed between the 0.4 and 0.5 versions. It was directly replaced by the chaingun.