Difference between revisions of "Maggot"

The Maggot is an enemy found in Doom 3. Maggots have two heads, and have a open, bloody back with retracting barbed bones inside. The maggots have two long black tongues (one for each head.) They can also move on all "fives" (since they have five limbs), although they can sometimes move around with only their feet, but usually only if they are near the player. 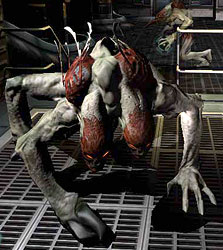 A Maggot from Doom3

They are melee enemies only and either rush up to the player to rend at them with their claws or perform a long-range leap which is nearly impossible to dodge.

Despite their size and mobility style, they are not known to leap as much as the Imps do, and are even weaker than the Imps. A single shotgun blast can easily kill a maggot.

Another good strategy is to use the Machinegun, or even the pistol, to kill them, since they have very low healthpoints. It is also a good idea to, later in the game, use the chainsaw on them, considering that they are melee-attack enemies only.

The Maggots make their first appearance in Alpha Labs Sector 1.They are small and very fast, making them hard to hit