Difference between revisions of "Mancubus" 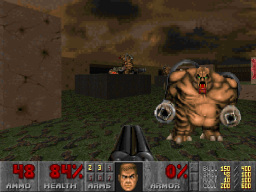 A gathering of mancubi in MAP07: Dead Simple, in Doom II.

The mancubus is a heavily-obese yet formidable demonic monster shambling about on sturdy, stumpy elephant-like legs, glaring at opponents through hateful green eyes, while dribbling the remains of its victims from a lusting mouth, displaying sharp yellow fangs. To make things worse, its arms have been replaced by huge flamethrowers capable of spouting a rapid series of scathing bursts of flame, which are powered by a pair of fuel tanks grafted onto the obese monster's back. The game manual describes the mancubus as follows: "The only good thing about fatso is that he's a nice wide target. Good thing, because it takes a lot of hits to puncture him. He pumps out fireballs like there was no tomorrow.".

Mancubi are dangerous opponents, but have a number of exploitable weaknesses. They are slow, and make large targets, so are easy to kill with rapid-fire weapons. The rocket launcher is possibly the most effective weapon against the mancubi. Furthermore, because they pause briefly before attacking, and also give out their distinctive battle cry before firing, it is pretty easy to prevent them from attacking using slower weapons, even the super shotgun. When they do attack, it is helpful to attempt to keep one's distance. Otherwise, the player might take two fireballs instead of just one. When dodging from a greater distance, it is important to avoid over-dodging. With the first two attacks from the mancubus, one fireball will go straight toward the player while the other will fly off diagonally to the other side (left or right, depending on the player's location); in the third volley, one will go left and one right. This pattern can be figured out and used to avoid mancubus attacks.

Once a mancubus has begun to attack its target, it continues to fire (if it remains unhurt while firing) until all six bursts have been discharged, even if the target has moved out of its sight. This characteristic of their attack can be abused to cause monster infighting. 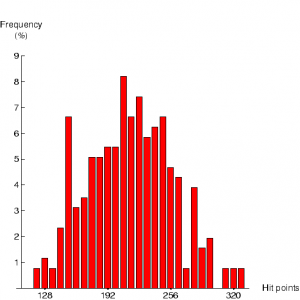 In classic Doom, the mancubus is first encountered on these maps:

The IWADs contain the following numbers of mancubi:

While their function in Doom 64 is unchanged, their appearance is greatly altered. They have less fat and a more bear-like face, are taller and wear a metal body harness.