Difference between revisions of "Mancubus (Doom 3)" 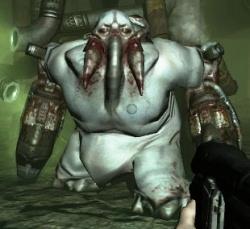 A Mancubus from Doom 3

The Doom 3 equivalent of the Mancubus is more elephant-like or Cthulhu-like since the Making of Doom 3 book states the latter.

Like the original version, it has a fireball launcher for each arm, but unlike the original, it does not fire the two launchers simultaneously, firing each in turn instead. The Doom 3 Mancubus is tougher than its classic version, taking as many as six direct rocket hits to kill, making it the toughest (but also one of the slowest) non-boss creature in the game. Furthermore, unlike the classic Mancubus, the Doom 3 version has a melee attack: both of its launchers are used as hammers.

These monsters are usually accompanied by Cherubs. This has lead to some believing they are the offspring of Mancubi.