Revision as of 20:55, 18 August 2022 by Bonciu (talk | contribs) (Minor change don't mind this. Yes there are 14 separate shell entities in the editor, but one gets moved as it is replaced by a large shell box on recruit.)
(diff) ← Older revision | Latest revision (diff) | Newer revision → (diff)
A checked version of this page, approved on 19 August 2022, was based on this revision.
"All units. This is Sergeant Kelly. We're under attack by an unknown enemy force. Fall back to Marine HQ to regroup! I say again fall back to Marine HQ and await further orders!"
― Sergeant Kelly [source] 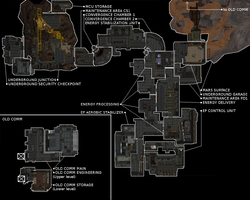