Masters of Doom: The Animated Series

In 2006, a Flash cartoon entitled Masters of Doom: The Animated Series was circulated around the Internet, which contains several references to pop culture media. The cartoon was inspired by the book Masters of Doom by David Kushner. The cartoon focuses on the creators of the game Doom, rather than the game itself.

This flash cartoon won daily 3rd place, was featured on the front page and has gotten good reviews from people on [Newgrounds http://newgrounds.com/portal/readreview.php?id=303494]. References include Wolfenstein 3D, Commander Keen, [remors, Beetlejuice and Batman. Webster's Dictionary is parodied as Webster's Wikipedia. A copy of Mein Kampf can also be seen on the desk of teacher Martin Van Buren.

Tom Hall wears a Commander Keen helmet in this flash clip. In addition, he references the vorticon race as a dedicated target for pizza. John Carmack is a robot in this cartoon; and talks like The Terminator does. A sprite-ized photo of Adolf Hitler is shown behind a teleportation device that John Carmack tests his cat on; and this is co-referenced with Wolfenstein 3D and Doom.

The guitar solo played during the opening title sequence(s)is an exerpt from the song "Instruments of Destruction" by N.R.G., which was originally written for Transformers: The Movie. Several background songs are pieces from the Raymond Scott Quintet, however most of the soundtrack was comprised of the soundtrack to Doom and Doom II (composed by Bobby Prince)

Instruments of Destruction by N.R.G.

In an 18th Century Drawing Room by Raymond Scott

At Doom's Gate by Bobby Prince

War Dance of the Wooden Indians by Raymond Scott

At an Arabian House Party by Raymond Scott

The End of Doom by Bobby Prince

The characters from the cartoon were all drawn by Julius von Brunk, and partially designed by Mike Lombardo. Most character models went through dramatic changes before being put in the final works.

John Carmack's first shirt was solid dark blue, until Mr. Lombardo suggested he wear a white t-shirt with a dead smiley face, as mentioned in the book. Julius von Brunk wanted Carmack to have pupils underneath his eyes, but Lombardo wanted a more cold, lifeless eye look for Carmack. Thus, the lenses of his glasses are always filled in with a gradient.

John Romero was intended to wear jeans and a white sleeveless shirt, while dressing as the Doom marine only in the opening scene. However, Brunk and Lombardo wanted to save time and recycle drawings by having Romero wear the same outfit constantly.

Tom Hall always wears the Commander Keen helmet. In the original script, he was written to remove his helmet while saying his famous line, "Oooh, yes, pizza... The chosen food of the Vorticon race!"

Adrian Carmack was the easiest to make, according to the creators. He was also the most accurate portrayal, and had the best blinking and lip sync animations. 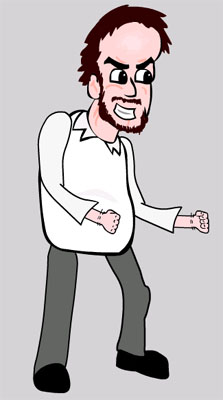 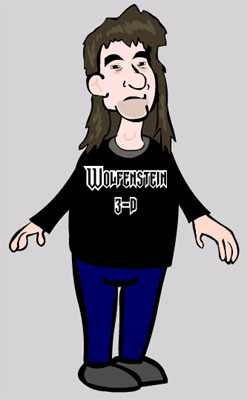 "Of course, in real life we're all a bit different but I just about bust my gut laughing at the way these guys animated us - it's great!" - John Romero