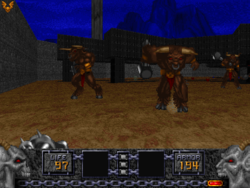 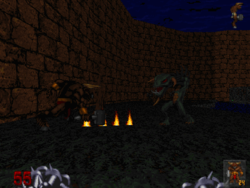 The Maulotaur is a creature from the Heretic-Hexen series. Maulotaurs greatly resemble the mythological Minotaur, except that they wield giant hammers (or mauls), which they use to smash their enemies into a pulp. They also have several ranged attacks. One is a scatter of small, flaming pellets summoned with side-swipes of their hammers. Another is the ability to summon 'snakes' of flames that crawl along the ground and up ledges in a line formation. The third of their ranged attacks is to dash forward from a distance and gore their opponent, which seems to be used most often at medium range (usually when a player is trying to make optimum use of the Phoenix Rod). Maulotaurs are tremendously strong and tough with 3000 health. Like the Iron lich and D'Sparil, Maulotaurs cannot be transformed using the Morph Ovum or instantly killed by a Firemace under the influence of the Tome of Power. Like D'Sparil, the Maulotaur also has a 50% resistance to the powered up Hellstaff's rain and immunity to splash damage.

In Heretic, they sometimes drop a Flame Orb worth 10 shots, and on rare occasions, drop a Mystic Urn when killed.

As a Heretic boss, any monster that is hurt by him will not fight back. However, the boss will attack any non-boss creature that hurts him.

Maulotaurs also appear in Heretic's sequel, Hexen, as summonable creatures that will fight for the player, created by an artifact known as the "Dark Servant". The Maulotaur will attack enemies without question, but each summoned Maulotaur fades from existence after roughly 30 seconds, or if they are killed first (they have 2500 hit points). Also, they have 'notoriously bad aim', and will not consider withdrawing their attack even if the player is directly between them and their target. It's possible for a player to be killed accidentally in this way.

The Maulotaur is invincible during a charge, thus it is a waste of ammo to attack when they are performing the attack.

One of the maulotaur attacks is bugged. When hammering the ground to create a trail of crawling flames, if the maulotaur is standing in water, sludge or lava, the flames will fail to spawn. This is a side-effect of the terrain code in Heretic: to create the visual of monsters and other objects being partially submerged, a "floor clipping" effect is used which lowers the actor by 10 units. The maulotaur spawns the flames at its feet, so if it has been lowered by the terrain's foot clip effect, the flames end up being spawned below the floor and the engine fails to create them.

This bug can be used deliberately to represent a maulotaur being unable to create flames in water, although it is not only the water flats that are affected. For this reason, a compatibility option or proper support for it is generally offered by source ports which fix the bug, such as Doomsday and ZDoom.

In the IWADs the maulotaur is first encountered on these maps per skill level:

The IWADs contain the following numbers of maulotaurs per skill level: