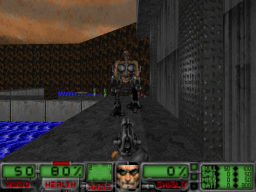 Mechamaniacs are enemies from Hacx. With 800 hit points, these partly robotic mutants are extremely dangerous. They have two cannons mounted on their body and they can shoot photons at the player. One shot from a Mechamaniac is strong enough to kill a player with 100% health. Fortunately, their attacks are not too hard to avoid and strafing while fighting these foes often helps. When facing them it is recommended to use strong weapons such as the cryogun or the photon 'zooka.

The mechamaniac is not immune to the splash damage from its own projectiles, so it is possible for them to accidentally kill themselves.

The monster also has an great resemblance to Quake's Armargon (found in one of the extra mission packs). Ironically, it was Quake which caused Hacx to fail being a success.